Syrian opposition groups are planning to escalate an offensive against government forces in Aleppo, the strategic city divided between rebels and troops loyal to President Bashar al-Assad, fighters have told Al Jazeera.

Raed Al Halabi, a fighter in the local Halab al-Shahba Brigades, said on Tuesday a coalition of armed groups will launch shells and car bomb attacks against Aleppo’s government-held neighbourhoods with the hope of advancing and opening the government-besieged supply route into the city.

The coalition – Fateh Halab, or Aleppo Conquest – includes most armed rebel groups fighting in the city, including Ahrar al-Sham, Jaysh al-Islam and several factions aligned with the Free Syrian Army.

“The shelling on regime military sites has already started and we will begin the advance soon,” he told Al Jazeera by telephone from the battle frontline in Aleppo.

SANA, the Syrian government’s official news agency, reported that at least seven civilians were killed by rebel-launched shells in Aleppo on Tuesday afternoon.

Fighting has intensified in Aleppo in recent days as government forces target residential areas in the eastern, rebel-held parts of the city with air strikes. Rebel groups, meanwhile, have killed at least 30 civilians since Monday in shell attacks on Aleppo’s government-held areas.

In recent weeks, government forces have closed off a key supply route in Aleppo, prompting concerns about the lack of food, water, medicines and fuel in the northern city.

Government and Russian air strikes on Tuesday also targeted areas across the outskirts of the city and in the Aleppo countryside, according to the UK-based Syrian Observatory for Human Rights.

Middle East analyst Firas Maksad said that while “Aleppo is key” for government efforts to keep supply lines open, for the opposition, “this is really their last stand.

“If they lose Aleppo, which they’ve held a major portion of now for about four odd years, they might as well have lost all the battle for Syria,” the Washington DC-based analyst told Al Jazeera.

Ahmad Jalal, a fighter in Jaish al-Islam, confirmed the escalation of the efforts to drive back government forces, saying that rebels have attacked al-Ramosa neighbourhood, a stronghold of government forces and militias loyal to Assad.

Speaking to Al Jazeera, he claimed that rebel fighters, including those from the Ahrar al-Sham armed group, took control of several buildings throughout Ramosa.

Khalil Hajjar, a media activist at the Aleppo Media Centre, said opposition fighters were advancing in the western Aleppo countryside. “The battles are ongoing and the regime is losing ground,” he told Al Jazeera.

Earlier on Tuesday, the Syrian Civil Defence said helicopters had dropped containers of chlorine gas overnight on the rebel-controlled Saraqeb town in the Idlib province. The group said several people were hospitalised due to the effects of the gas.

A day earlier, the Russian defence ministry said five Russian soldiers were killed near Saraqeb when their helicopter was shot down.

“But the effectiveness of the rebels’ counteroffensive depends on the level of support their backers are willing to supply,” Nashashibi told Al Jazeera.

The Syrian conflict started as a largely unarmed uprising against Assad’s government in March 2011, but it quickly escalated into a full-on civil war that has left at least 280,000 people dead, according to the Observatory.

Efforts to mediate a ceasefire have collapsed time and again. 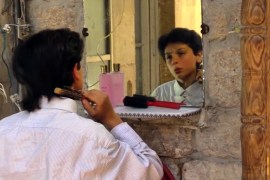 Syrian child actor killed as he tried to escape Aleppo

Fourteen-year-old Qusai Abtini was killed as he tried to escape during the most recent shelling of the city. 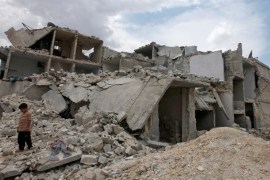 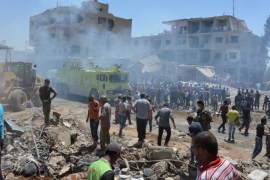