With its rich and diverse ecosystem, Cambodia’s Tonle Sap Lake is often described as the beating heart of the country, supporting the livelihoods of more than one million people and attracting visitors from across the region.

Yet, climate change and man-made pressures are affecting the lake, resulting in a drastic reduction in its fish stocks and worrying low water levels.

Earlier this year, the Global Nature Fund designated it as the world’s most “threatened” for 2016.

“In recent years, the water volume continuously declined with negative impacts on fish migration and the import of sediments,” GNF said in a statement.

“In some places in the Tonle Sap Lake, the water level dropped more and more in the dry season and wetlands dried up permanently. Beyond that, illegal fishing methods, like poison, explosives and small-meshed nets are often used.”

For years, fishermen have earned a living from the lake’s waters, which spread across 16,000sq km.

But things have changed recently for people like Bun That, whose family have been fishing for generations.

“For the past several years, the catch got less and less and I couldn’t feed my family,” he said.

“So I gave up and looked for work as a taxi driver.”

In 2016, the region saw an unprecedented drought but – according to officials – environmental factors and man-made effects pressure were mainly to blame.

The lake is vital for the region, and for a part of the population it is their only option to survive.

If the current situation continues, many may have to find other ways to earn a living. 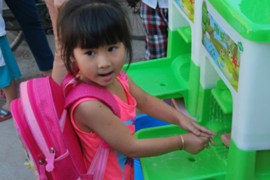 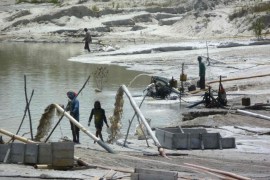 Metals from smart phones or laptops come from illegal mines in countries like Indonesia, where miners toil in mud.