Philadelphia, Pennsylvania – To both tears and cheers, former presidential nominee Bernie Sanders took the podium at the Democratic National Convention to urge his supporters to come together and vote for Hillary Clinton, telling them they cannot “sit out” the election.

Amid a hearty welcome and sustained applause that lasted almost three minutes, Sanders told his followers that Clinton “must become the next president of the United States”, and urged unity.

Sticking carefully to his script, the Vermont senator painted a picture of a dark America should Donald Trump, the Republican nominee, win the elections in November.

“Take a moment to think about the Supreme Court justices that Donald Trump would nominate and what that would mean to civil liberties, equal rights and the future of our country,” he warned the crowds clad in T-shirts and waving signs bearing his name.

While clutching his hands to articulate togetherness, Sanders spoke about both camps working to create the party’s “most progressive platform”, which now included anti-Wall Street provisions and opposition to “job-killing free trade agreements like the Trans-Pacific Partnership”.

Amid shouts of “Bernie, Bernie”, he acknowledged that the primary season had divided the party, which was recently hit with an email leak that showed Democratic National Committee Chairwoman Debbie Wasserman Schultz expressing favouritism to Clinton.

“I understand that many people here in this convention hall and around the country are disappointed about the final results of the nominating process,” Sanders said.

“I think it’s fair to say that no one is more disappointed than I am. But to all of our supporters – here and around the country – I hope you take enormous pride in the historical accomplishments we have achieved.”

Throughout the night, party speakers attempted to bridge the schism that had been brewing over time. Comedienne Sarah Silverman admonished Sanders supporters, calling them “ridiculous”, before introducing Paul Simon with his 1970 classic Bridge Over Troubled Water.

Earlier on Monday, the divide within the party was apparent when supporters, angered by the Democratic National Committee’s treatment of their candidate of choice, drowned out speakers with shouts, and even ignored appeals by Sanders himself to unite for the sake of the party.

Efforts to avoid signs of discord on the first day of the DNC intensified on the convention floor, as Sanders delegates chanted his name, prompting his campaign to send an email urging them not to walk out and warning that it could damage “our credibility as a movement”.

Some Sanders allies even shouted “lock her up,” an echo of the sentiments voiced by Republicans at their own national convention in Cleveland just last week.

Trying to pacify the Vermont senator’s supporters, the party’s leadership issued a formal apology for the “inexcusable remarks made over email”.

POLL: Most Americans fear election of Clinton or Trump

Schultz had resigned on Sunday but earlier today, after she was heckled while trying to speak at a Florida delegation breakfast, she also gave up her right to gavel open the convention.

That did not seem to sway the delegations; at one point Sanders himself was met with a cacophony of boos, followed by chants of “We want Bernie”, as he addressed a rally and urged his followers to elect Clinton and her vice presidential candidate Tim Kaine.

Prominent Democratic elected officials who supported Sanders in the primaries, however, said that despite the discord over the leaked emails, the party had come a long way and achieved a milestone.

“Sanders and Clinton came together to write the most progressive platform that we have ever had,” Congressman Keith Ellison of Minnesota told Al Jazeera. “I’m feeling confident that we’re going to be united.”

Some of Sanders supporters were not ready to hear calls for unity or voting for Clinton. Daniel Martin-Mills, who came to Philadelphia from Michigan, said that he would not vote for Clinton, even if it means it would give Donald Trump an edge.

“I don’t believe that Hillary Clinton has anyone’s interest in mind but her own,” he said. “If she were elected, it would be a tragedy for our nation. I think she would sell us out for her own gain.

“I don’t care for Trump either, but there’s no way in the world I would vote for Hillary. It won’t be my fault [if he wins]. I vote with my conscience and there are more than two choices. I’d vote for Jill Stein.” 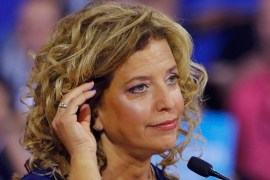 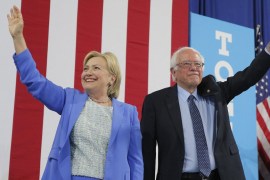