Two Hong Kong journalists have been jailed in China, accused of running an “illegal business” that sent political magazines to the mainland, one of their lawyers said.

“The two both admitted guilt to the court and said they ‘will not appeal’,” Chen Nansha, Wang’s lawyer, told the AFP news agency.

The men, who were arrested in mainland China in 2014, worked for the political magazines New-Way Monthly and Multiple Face. Wang was a magazine founder and Guo a chief editor.

This move is seen widely as another attempt by the mainland authorities to curb the influence of the Hong Kong press in China. The magazines are published legally in Hong Kong, yet Beijing exerts much heavier control on the media in the mainland.

“With the conviction of the two Hong Kong journalists, it seems that the Chinese government … continues on a path of suppressing and intimidating critics outside mainland China, to say nothing of its detractors inside China,” Yaqiu Wang, a spokesman with the New York-based-Committee to Protect Journalists, said in a statement to Al Jazeera.

Wang said it seems that China has also been unfazed by international scrutiny and criticism following the disappearance of five Hong Kong booksellers last year.

Sham Yee-lan, chairwoman of the Hong Kong Journalists Association, also said that China appeared to be steeping up its crackdown.

“The jail terms were very heavy. The publications were in fact printed in Hong Kong by registered companies here,” she told the Post.

“It appears that the Chinese government has intensified its crackdown on such publications.”

The sentences come after five booksellers from Hong Kong, whose publishing house was known for gossipy titles about Chinese political leaders, went missing and resurfaced in the mainland last year.

One of the five is still detained and another, who skipped bail and returned to Hong Kong, has revealed how he was blindfolded and interrogated for months during his detention.

Wang and Guo’s magazines are widely available in the former British colony, which has greater freedoms than the mainland under agreements signed with Britain during the 1997 handover.

At the time of their detention in 2014, Shenzhen police said the men were “operating an illegal publication”.

According to reports at the time of their trial in November, prosecutors said their Hong Kong-registered company National Affairs Limited had earned $900,000 from the New Way Monthly and Multiple Face publications.

But the defence insisted that only eight copies were sent to the mainland, all to friends of the publisher, the South China Morning Post said.

Although the city has the status of a special administrative region of China, the two have separate legal systems, distinct police jurisdictions and maintain strict border controls.

Pro-democracy Hong Kong politician Lee Cheuk-yan told AFP that the sentences imposed on the journalists were “a warning to anyone who wants to do business in China especially in the area of publication – they will be subjected to suppression and censorship and if they are not following the party line, then they will be jailed”.

Willy Lam, a China expert at the Chinese University of Hong Kong, said the magazines – which covered Chinese politics – were printed in Hong Kong, then distributed in the mainland through unofficial networks.

“Beijing is sending an additional warning apart from the arrest of the Causeway Bay booksellers, not to play with fire,” he said. 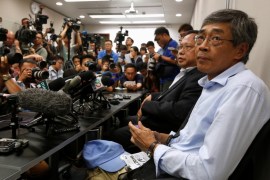 One of the five who went missing last year reveals he and a colleague were abducted and held by mainland authorities. 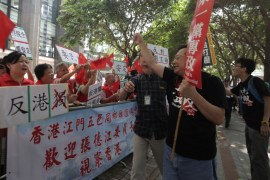