Air strikes in Syria’s divided city of Aleppo have killed dozens of people, according to a monitor, as fighting intensifies across the country despite UN appeals for greater humanitarian access and the resumption of peace talks.

The UK-based Syrian Observatory for Human Rights said on Tuesday that Syrian government helicopters targeted the al-Mashhad neighbourhood in the rebel-held half of the city, killing at least 18 people.

The Observatory added that the number of casualties was likely to rise owing to the high number of people critically wounded.

Zouhir Al Shimale, an Aleppo-based journalist, said air strikes, including on a residential building, have killed at least 32 people over the past two days.

“Residents say the building was full of families [internally displaced] from other areas,” he told Al Jazeera by telephone.

Separately, at least 42 civilians were killed on Monday in Syrian government air strikes on al-Atareb, a city in the Aleppo province.

In recent weeks, government forces’ advances around the city’s outskirts have severed the only remaining route into the rebel-held eastern neighbourhoods, effectively placing them under siege.

“There are around 400,000 civilians in the besieged city of Aleppo on the brink of starvation. Just last Sunday, two days ago, the Russian and the Syrian regime air forces bombarded the six remaining hospitals and medical facilities in [the city],” Farah al-Atassi, of the opposition’s High Negotiations Committee (HNC), told Al Jazeera on Tuesday.

Syrian government air strikes over the weekend put five medical clinics in Aleppo out of action, according to local rescue workers and the Observatory.

READ MORE: What hope is there for Syria’s besieged?

Opposition groups associated to the Free Syrian Army, however, insisted that the al-Qaeda-linked al-Nusra Front and armed groups like it have only a minor presence within the city.

The latest attacks came amid a renewed international push to restart the stalled Syria political talks next month.

Speaking in Geneva on Tuesday, following a closed-door meeting with US and Russian officials, UN special envoy to Syria Staffan de Mistura said Washington and Moscow had been discussing ways to work towards the reintroduction of a ceasefire.

De Mistura told reporters that a third round of intra-Syrian peace talks is set for August. “In the context of the bilateral meeting today, it was also agreed that we, the UN – the facilitator, the mediator – should continue preparing proposals for addressing difficult issues that are related to the [talks].”

But the HNC’s Atassi told Al Jazeera that de Mistura had said “nothing new”, and that there was “no progress on the ground” to convince the opposition to return to the negotiating table.

The HNC, the opposition’s main negotiating bloc, has previously said progress must be made on the implementation of ceasefires, the lifting of sieges and access to humanitarian aid before it will return to Geneva.

Al Jazeera’s Paul Brennan, reporting from Geneva, said de Mistura used the word “homework” during Tuesday’s press conference, meaning the technical delegations from both the American and the Russian sides needed to figure out “how and if” they could somehow work together.

The Americans, added Brennan, would have to compromise on how to discern between groups like al-Nusra, which the UN describes as a “terrorist” group, and moderate opposition rebel groups, as the two often fight side-by-side.

The Syrian conflict started as a mostly unarmed uprising against President Bashar al-Assad in March 2011, but it quickly escalated into a full-blown civil war between the government, armed opposition fighters and hardline groups such as the Islamic State of Iraq and the Levant (ISIL, also known as ISIS). 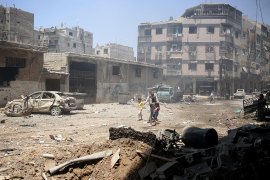 Rebel-held areas across Syria have been targeted by intense government air strikes. 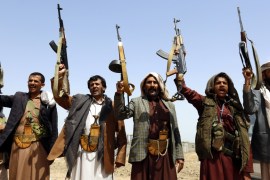 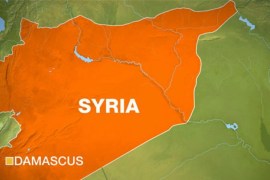 Monitor says dozens were wounded in attack while witness claims at least six died in rare blast in government-held area.