Sun Moon Lake, Taiwan – From politicians to market stallholders, an adage is doing the rounds in Taiwan: don’t put all your eggs in one basket. It rings especially true, now that China is turning the screws on the island’s new, pro-independence government.

Tsou Jin-pen, 86, adheres to that proverb. She also knows plenty about eggs, which she boils in a homemade broth of tea and mushrooms and sells to the tourists that flock to Sun Moon Lake’s turquoise waters in central Taiwan.

But business is bad. The flow of vacationers from mainland China is drying up – widely viewed as a sign of Beijing’s displeasure at the autonomous streak shown by Taiwan’s new president, Tsai Ing-wen, who took office in May.

“There’s an obvious decrease,” said Tsou, who has been in business since the 1950s, before roads were built around the lake’s shoreline. She still sells thousands of her salty eggs each day, but queues of hungry tourists are shorter than before.

Taiwan’s government says a sharp decline in Chinese tour groups accounts for a 15 percent drop in overall arrivals. Tsou said it is more like one-third. Flights have been cut. Hotels and travel agencies are taking a hit.

“We should focus our efforts evenly on different markets, not just on China,” the egg-boiling grandmother told Al Jazeera.

Tsou’s sentiments are echoed across this island of 23.4 million people, which in January voted to oust a pro-China government and elect Taiwan’s first woman president, Tsai, who heads the go-it-alone Democratic Progressive Party.

The issue is deeper than just China-Taiwan tensions.

The US said recently it would continue to operate in the South China Sea, only weeks after a court ruled against Beijing’s territorial claims in a tense region in which China, Brunei, Malaysia, the Philippines, Taiwan and Vietnam have rival claims.

By distancing itself from Beijing, Taiwan may have to rely less on China for sending four million tourists each year; as well as receiving 38 percent of its exports and more than 60 percent of its outbound investment.

“Do we really want to depend solely on China, or do we have to actually diversify?” Connie Chang, the planning chief of the government’s National Development Council, told Al Jazeera from her office in central Taipei.

Southeast Asian markets are the new frontier for Taiwanese goods and a source of holidaymakers, Chang said. Peeved Chinese officials may “hit us hard”, she added. “The cost or the pain, it is still too early to” measure.

Realignments are easier said than done. Taiwan touts itself as a paradise for mountaineers, cyclists and gastronomes, but it lacks the broader appeal of Bangkok’s nightlife, Cambodia’s iconic temples, or beaches in the Philippines.

The island has flagship electronics brands, such as Asus, HTC and Acer that sell anywhere. But it also makes many superconductors and flat-screen monitors that fit inside other devices. Chinese factories take much of this stock.

A long-discussed free trade deal with China is now on the backburner, said Roy Chun Lee, a deputy director at the Chung-Hua Institution for Economic Research, a think-tank. Should Beijing wish to further hurt Taiwan’s economy, it has many options.

“There’s huge room for discretion enjoyed by Chinese authorities. They have many tools to implement their political policy,” Lee told Al Jazeera. Officials can use everything from tax codes to environmental protection laws to halt Taiwanese imports.

When Taiwan targets a new trade partner, Beijing can weigh in and cool their enthusiasm, he added. Meanwhile, Taipei is outgunned by Beijing’s mega-projects, such as the One Belt, One Road trade and transport web linking Asia, Europe and Africa.

Instead, it must plug gaps in a crowded market, such as by offering solar energy systems to small, remote islands. As the Asia-Pacific’s “most trade-dependent country”, anything to drum up business is good for Taiwan, Lee added.

The Trans-Pacific Partnership (TPP) had raised Taiwanese hopes of a trade boon, but lacklustre support from the presumptive Democratic and Republican 2016 presidential nominees, Hillary Clinton and Donald Trump, suggest the trade deal may yet flop.

Beijing has viewed Taiwan as a wayward province since defeated Nationalist forces fled there after a civil war with the Communists in 1949. It has never renounced the use of force to bring the island under its control. Chinese officials declined interview requests.

Tsai, who heads the pro-independence Democratic Progressive Party, said she wants to maintain the status quo with China and is committed to ensuring peace, but Beijing suspects she will push for formal independence.

Last month, China closed a communication link with Taiwan, saying Tsai had refused to accept the so-called “1992 consensus” reached between Beijing and Taiwan’s then-ruling Nationalists – an agreement that there is only one China, which can be interpreted flexibly by either side.

The communication mechanism was set up in more amicable times under the rule of Taiwan’s then-president Ma Ying-jeou, who took office in 2008 and signed a series of landmark trade and tourism deals with Beijing.

Relations are at their lowest point in years. This month, Taiwan’s navy misfired a supersonic anti-ship missile and struck a Taiwanese fishing boat, killing its captain and jangling nerves on both sides of the Taiwan Strait.

US Chief of Naval Operations John Richardson said last week US forces would continue operating in the South China Sea in accordance with international law. China accuses the US of stirring up trouble on a strategic route through which some $5 trillion of trade moves annually.

Speaking in Sydney, US Vice President Joe Biden assured Australia, an ally, there would be no retreat from Washington’s pivot to the Asia-Pacific region, regardless of who wins the presidential election in November.

Against this backdrop, pro-China voices in Taiwan have fallen largely silent. The island’s population is mindful that, on average, they live for some five years longer than and are more than three times richer than their mainland counterparts.

“The tourist industry and farmers will be affected, but still people vote for Tsai because they want to show that Taiwan will not be absorbed by China,” David Chang, chairman of Storm Media, an online publisher, told Al Jazeera.

“We want de facto independence. We want to maintain our democracy and our way of life.”

Back at Sun Moon Lake, half-empty boats ply the waters, ferrying tourists to take selfies in front of Xuanzang Temple. Others ride a cable car, or pose for photos alongside indigenous dancers at a tacky “aboriginal” theme park.

Many had heard of Tsou’s eggy delicacy and longed to sample her treats. They line up and take photos. But Tsou is coy, refusing to reveal her secret recipe. Her ingredients are grown locally, and “I prepare the eggs with my heart,” she said.

Business is slow now, but will recover, she added. When she was born, Taiwan was under Japanese colonial rule. Her first customers were monks, not tourists. Over the decades, her business and the island have seen big changes.

Telling Tsou not to fret about business is – to use another fitting adage – like teaching grandmother to suck eggs. “The tourists will come back. It comes and goes in cycles,” Tsou said. 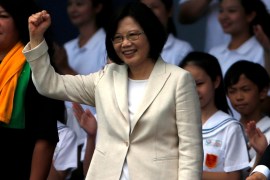 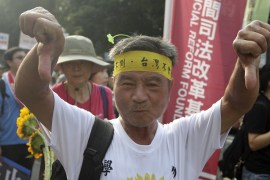