US-backed Syrian rebels have given the Islamic State of Iraq and the Levant (ISIL) group 48 hours to leave their stronghold of Manbij in Syria, after US-led air strikes nearby killed scores reported to be civilians.

Elsewhere in Syria, a monitor said at least 51 civilians were killed in bombing raids on rebel-held areas of the country.

Thursday’s announcement comes two days after strikes launched by the US-led coalition fighting ISIL (also known as ISIS) reportedly killed at least 56 civilians in the Tokhar area in the northern city of Manbij of the Aleppo governate.

“This initiative is the last remaining chance for besieged members of Da’esh [the Arabic acronym for ISIL] to leave the town,” the Manbij Military Council, part of the Syrian Democratic Forces (SDF) alliance, said, according to AFP news agency.

The SDF, an alliance of Arab and Kurdish fighters backed by the US, launched an offensive against ISIL to retake Manbij late last month.

They have besieged the town and are advancing to the city centre under the cover of air strikes by the US-led international coalition.

The council said that ISIL fighters would be allowed to take individual light weapons with them.

The statement also called for civilians to try to leave the town or distance themselves from areas where clashes are taking place.

“We took this decision now after ISIL used residents as human shields, after the media pressure on us, and to protect whatever civilians are left in the town,” an SDF commander told AFP on the condition of anonymity.

The Britain-based Syrian Observatory for Human Rights said the civilians killed on Tuesday were villagers fleeing fighting in the village of al-Tukhar, 14 kilometres from Manbij.

The US-led coalition has said it is investigating reports of civilian deaths in the strikes.

“The US central command has confirmed to Al Jazeera that it was conducting air strikes in the area and says it needs to investigate allegations of whether civilians were injured or killed in this incident,” Al Jazeera’s Rosiland Jordan, reporting from Washington on Tuesday, said.

Syrian activists called for international protests over the incident, and local demonstrations have already been held inside Syria.

The opposition Syrian National Coalition on Wednesday urged the US-led anti-IS alliance to halt its strikes to allow a thorough investigation into what it termed a “massacre”.

Coalition president Anas al-Abdah said the alliance was responsible for the “crimes” in Manbij, which he said killed at least 125 civilians.

And there has also been international consternation, with the UN children’s agency UNICEF saying it had received reports up to 20 children might have been killed in the incident.

“No matter where they are in Syria or under whose control they live — absolutely nothing justifies attacks on children,” said UNICEF’s Syria representative, Hanaa Singer.

The Pentagon has acknowledged 41 civilian deaths in its strikes in both Syria and Iraq since 2014, but the Observatory has reported nearly 600 civilians killed in US-led raids in Syria alone.

Observatory head Rami Abdel Rahman said SDF fighters seized a southern district of the town, “bringing them the closest they have been to the centre of Manbij”.

On Thursday afternoon, the Observatory reported quiet in Manbij, though it was unclear if the calm was temporary or in response to the SDF’s ultimatum.

Earlier in the day, the monitor had reported additional US-led air strikes and it said the SDF had advanced inside the town overnight.

Elsewhere in the country, the Observatory said at least 51 civilians had been killed in bombardment of rebel-held areas.

It said at least 13 people, including three children, were killed in government air strikes and shelling on the Eastern Ghouta area outside the capital Damascus.

Another 23 people were killed in strikes in Idlib province, though it was not clear if they were carried out by the regime or its Russian ally.

Government bombardment also hit two neighbourhoods of the rebel-held east of Aleppo city, where 15 people were killed, among them six children, the Observatory said.

Opposition-held neighbourhoods of Aleppo have been effectively under siege for the past two weeks, after government forces severed the only remaining supply route into the east of the city.

The UN on Thursday called for a weekly 48-hour truce in Aleppo to allow aid deliveries to the besieged east.

Jan Egeland, the head of the UN-backed humanitarian task force for Syria, warned that more than 200,000 people in eastern Aleppo were “on the brink of starvation”.

“Humanitarian convoys are ready, humanitarian workers are ready. We have the supplies. We need a break in the fighting,” he said.

ISIL has held the city since 2014, the year that the armed group seized control of large parts of Syria and neighbouring Iraq and declared its “caliphate”. 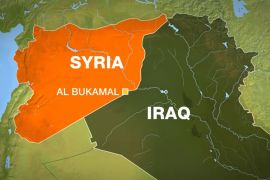 ISIL has recaptured a strategic border crossing between Syria and Iraq just hours after losing it to US-backed rebels. 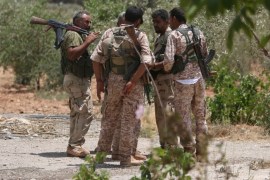