President Barack Obama spoke to Turkish President Tayyip Erdogan, offering US assistance as Ankara investigates last week’s attempted coup, but urging the government to show restraint as it pursues those connected in the failed attempt.

White House spokesman Josh Earnest said the two leaders discussed the status of US-based Turkish cleric Fethullah Gulen, whom Erdogan has accused of being behind the coup attempt and whose extradition Turkey has said it will seek.

Earnest said the Turkish government had filed materials in electronic form with the US government, which US officials were reviewing.

He said any extradition request from Turkey, once submitted, would be evaluated under the terms of a treaty between the two countries.

The US state department later said it was still in the process of analysing materials submitted by Turkey, but that it could not characterise the documents as an official extradition request for Gulen.

Gulen, who is resident in the US, has denied any involvement in the military plot to topple the government, and hinted that the coup might have been staged to justify his arrest.

Around 50,000 soldiers, police, judges, civil servants and teachers have been suspended or detained since the coup attempt, stirring tensions across the country of 80 million which borders Syria’s chaos and is a Western ally against the Islamic State of Iraq and the Levant (ISIL, also known as ISIS).

“This parallel terrorist organisation will no longer be an effective pawn for any country,” Prime Minister Binali Yildirim said, referring to what the government has long alleged is a state within a state controlled by followers of Gulen.

“We will dig them up by their roots,” he told parliament.

Al Jazeera’s Bernard Smith, reporting from Istanbul on Tuesday, said as many as 20,000 government employees have been detained, or are being pursued by the authorities, including 185 admirals and colonels, and 1,500 finance ministry officials.

They are part of a widening purge by the Erdogan government targeting alleged supporters of a coup attempt on Friday.

Reuters reported on Tuesday that 257 employees from Yildirim own office had been removed from duty.

Turkey’s Education Ministry on Tuesday suspended 15,200 personnel in connection with the failed coup, state media reported. Later, the High Education Board ordered the resignation of all 1,577 deans employed at all universities, TRT reported.

Turkey’s religious directorate issued a statement on Tuesday, saying it would not offer religious funerary services, including funeral prayers, for soldiers involved in the failed coup attempt, except for those who had been “forcibly dragged” into the military actions attempting to overthrow the government. 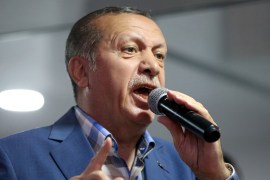