Pro-Syrian government forces and their allies have closed the only road leading into the rebel-held side of Aleppo, opposition activists and a monitor said.

The Britain-based Syrian Observatory for Human Rights told the Reuters news agency that government forces and members of Lebanon’s Hezbollah group had reached the strategically vital Castello Road on Sunday, closing it and raising fears of a humanitarian disaster.

Government forces descended on the road and fully cut it off, Rami Abdel Rahman, head of the observatory, said. The troops had reached a point where they could fire on the road earlier this month, effectively cutting it off, but many people still risked the dangerous journey.

The Castello Road had been used by rebels but also by shopkeepers to bring in produce for and by people visiting relatives in Aleppo.

“The army has reached the road and even arrested a group of civilians who were walking there,” a rebel fighter from the Aleppo Revolutionaries group told the AFP news agency. “They are now setting up sandbag barriers.”

On Saturday, at least 28 civilians – including children – were killed in a bombardment of the rebel-held eastern districts, according to the observatory, which relies on a wide network of sources on the ground for information.

The UN has warned that nearly 300,000 people rely on the Castello Road for travel, food and medicine, with local market stalls sparsely stocked.

Residents also described searching in vain for fuel, whether for vehicles or home use.

MORE: You probably won’t read this piece about Syria

Aleppo was once Syria’s commercial powerhouse but has been ravaged by fighting since mid-2012, with several temporary truces failing to bring an end to the violence there.

More than 280,000 people have been killed and millions have been forced to flee their homes since Syria’s war erupted in 2011. 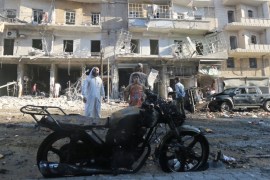