United Nations ­- Believers in true democracy may be disappointed.

Choosing the next head of the United Nations has enlivened the organisation’s usually sedate headquarters in New York, with high hopes for an energetic idealist to shake up the world body and do more to end wars and fight poverty.

A push for transparency by many smaller UN members means that everybody can see who is running in the 2016 race. A dozen candidates are being grilled in public hearings; a televised Al Jazeera debate on Tuesday will see more tough questions fielded.

Yet despite this openness, the final result will probably be another stitch-up. The UN’s 193 General Assembly members can nominate candidates, but its key five states – the US, China, Russia, Britain and France – still make the big decision.

One of the candidates, Croatian politician Vesna Pusic, praised the new “transparent process” for giving “visibility” to herself and her rivals. However, the permanent five (P5) UN Security Council members still fix “who is going to be selected”, she added.

The “UN without the big powers would be meaningless”, Pusic explained to Al Jazeera.

The winner will replace the current UN secretary-general, Ban Ki-moon, on January 1, 2017, once the South Korean diplomat ends his second five-year term, which critics lament as among the least-inspiring in the world body’s history.

Sure, it is a tough job. Ban has faced a platter of calamities and wars in Syria, Mali, and eastern Congo that elude easy fixes. Meanwhile, the globe is getting hotter than climatologists would like and has more refugees than ever before.

If Ban made a big decision without first getting a nod from Washington, Moscow and Beijing, he would stick his neck out more than diplomats are wont to do. Better to play safe and keep the P5 happy, even if that sidelines you on such hot topics as Ukraine.

Despite these handicaps, Ban has notched up some successes. He brought states together for gruelling talks underpinning a climate-change accord in December in Paris, and a set of global anti-poverty goals a few months earlier.

His list of shortcomings is longer. Under Ban’s watch, UN blue helmets brought cholera into earthquake-struck Haiti and started an outbreak that has claimed more than 9,000 lives. The world body has since tried to dodge compensating bereaved Haitians in US courts.

Then there was the sexual abuse of women and children in Central African Republic by peacekeepers.

According to Richard Bennett, a UN expert for the pressure group Amnesty International, Ban has stood idle as global security has “gone backwards”. He failed to act decisively when Sri Lanka brutally quashed its decades-old Tamil insurrection in 2009, he said.

“The secretary-general is not only a bureaucrat, they are a world leader who has a strong political and moral voice – and should use it,” Bennett told Al Jazeera.

More stinging rebukes come from within. In March, Anthony Banbury became the latest top UN official to break ranks and blast the world body. He decried an “Orwellian” dystopia of red tape that is driven by political expediency, not values.

Today, the UN can look far removed from the idealistic 1948 Universal Declaration of Human Rights. It is both bloated and overstretched; its staff can seem more interested in winning promotions than fighting malaria in sub-Saharan Africa.

Against this backdrop, diplomats have worked hard to reform it. A long-standing bid to expand the Security Council – which makes the UN’s major, binding decisions – with seats for Brazil, India, and other rising nations has failed to gain traction.

This year’s effort to throw light on the selection of the secretary-general is more promising. Campaigns, such as 1 for 7 Billion, call for a “highly-qualified and visionary leader” to streamline archaic UN systems and stand up to the big powers.

Past UN leaders were chosen in secret ballots by the P5 before being rubber-stamped by the General Assembly. Ban and his predecessors were thus lowest common denominators – the candidate deemed least offensive by the great powers.

The P5 is still expected to choose its preferred candidate behind closed doors, but the public debates and probing of resumes are designed to make it harder to advance the name of an unqualified or undeserving lackey.

“If there is a critical mass of member states rallying around one candidate … it will be much more unlikely that the Security Council would come forward with quite another name,” Mogens Lykketoft, president of the UN General Assembly, told Al Jazeera.

There are no guarantees this will work, he added, and we could see “the same old process once again”.

So far, there is no clear frontrunner. There are calls for the next UN chief to be an Eastern European woman, as neither criteria has been met before. The current list includes men, South Americans, and others. They are more technocrats than visionaries.

Irina Bokova of Bulgaria, head of Unesco, the UN’s cultural arm, is lauded as a competent desk-jockey, though her leftist past may spur a US veto. Argentine Foreign Minister, Susana Malcorra, a seasoned UN insider, is likewise viewed as a safe, if uninspiring, pair of hands.

Antonio Guterres, a former Portuguese prime minister and UN refugee tsar, can show pizzazz before a press pack. On Thursday, the Costa Rican diplomat Christiana Figueres said her success in managing the climate change talks made her a tested candidate.

A successful diplomat is “impartial and independent”, but does not use the UN’s 38th floor as a bully pulpit. Better to get “countries to talk to each other to come to common ground, and not for ourselves to take positions”, she told Al Jazeera.

Although Germany’s Chancellor Angela Merkel is discussed excitedly in UN corridors, nothing formal suggests she is interested. No announced candidate has Merkel’s gravitas; the job is likely to stay in the hands of a “secretary” rather than a “general”.

UN concerned about ‘Israel’s excessive use of force’

Helen Clark, former prime minister of New Zealand and current UN development chief, appeared unwilling to rock the boat in April. Asked whether she would challenge the big powers, she phrased her answer diplomatically.

The 2016 selection process has let outsiders peek into the UN machine, but P5 countries will not give up powers they won after World War II readily. Hand-picking the UN secretary-general is still one of their trump cards. 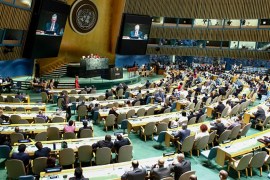 Time for Eastern Europe to shine at the United Nations

A new secretary general from Eastern Europe would bring a global view much-needed in the UN. 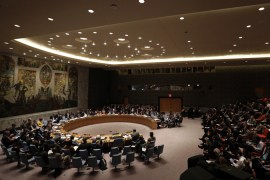