A committee in the UK’s Labour Party has decided that leader Jeremy Corbyn has the right to automatically appear on a ballot for a new leadership vote, amid efforts by members of parliament to oust him.

During a long meeting on Tuesday night, the party’s National Executive Committee (NEC) decided in a secret ballot that Corbyn, who comes from the party’s left, has the right to appear on a ballot and defend his leadership if challenged.

Corbyn’s opponents insisted that he needed the support of 51 MPs, or 20 percent of their total number, in order to appear on the ballot.

The decision may still be challenged in court.

“All other leadership candidates will require nominations from 20 percent of the PLP and EPLP.”

While a growing number of MPs oppose Corbyn, he commands the popular support of party members and supporters.

Corbyn’s shadow cabinet endured a wave of resignations last month, with many MPs demanding that he step down.

More than two-thirds of Labour MPs, 172, backed a motion of no confidence in Corbyn’s leadership last week; 40 voted to support him.

His former shadow business secretary, Angela Eagle, announced on Monday that she is standing against Corbyn for the leadership of the party.

“Jeremy Corbyn is unable to provide the leadership that this huge task needs,” she told press and supporters on Monday. “I believe I can.”

But Corbyn said he will win any vote owing to his popularity among party members and supporters. He was voted into the leadership with nearly 60 percent support in September 2015.

A recent study by academics from Queen Mary University and Sussex University found that 55 percent of Labour members who joined since May 2015 support deselecting MPs who challenge Corbyn’s leadership.

Deselection is the process of replacing MPs with new candidates in future elections.

A recent poll of Labour Party members by YouGov found that any of Corbyn’s potential opponents would be unlikely to beat him in a leadership election. The survey concluded that 51 percent of members were satisfied with Corbyn’s performance.

Richard Seymour, a British writer and author of a book on Corbyn, said the MPs’ “big mistake was to assume that members had given up on the idea of radical change, and would keep the party anchored to the centre ground”.

“Having let Corbyn get through the nominations barrier last time, just to avoid a completely barren leadership contest with no ideas, they are determined to re-stage that contest without him in it,” he told Al Jazeera.

Corbyn said his re-election campaign would be based on tackling inequality and poverty in Britain, adding that he would be reaching out to everyone in the party.

Corbyn’s opponent, Eagle, said she was pleased the NEC had reached a decision.

“I welcome the contest ahead,” she said on Twitter. “And I am determined to win it.”

The ongoing turmoil inside Labour has sparked fears that the party could split, as it did in the 1980s, and dilute the centre-left influence over the negotiations for Britaiin’s exit from the EU.

Labour’s internal strife has also fuelled tensions among its supporters. Police said on Tuesday that Eagle’s constituency office in northern England had been vandalised

“It is bullying. It has absolutely no place in politics in the UK and it needs to end,” Eagle said about the incident.

Corbyn said he and other MPS had received death threats. 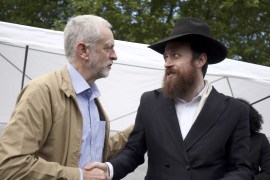 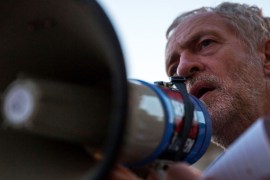 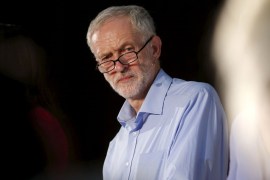