The Israeli parliament has passed a controversial law compelling non-governmental organisations (NGOs) that receive more than half of their funding from foreign state entities to declare so publicly.

Titled the “NGO transparency law”, the legislation had come under fire from left-wing groups largely relying on funding from foreign governments as an attack against critics of Israeli policies towards Palestinians.

Israeli officials who voted in favour of the law late on Monday said it served democratic purposes and boosted transparency.

Critics, however, said the bill targeted human rights groups critical of Israeli government policy and would not affect right-wing and pro-settlement NGOs, whose budgets are mostly made up of private donations.

“The idea behind the bill is not transparency, which already exists, but rather, public shaming of left-wing NGOs and the attempt to present them as foreign agents,” Anat Ben Nun, director of development and external relations at Israeli rights group Peace Now, told Al Jazeera.

“The only groups affected by this legislation are groups working for equality, human rights and peace. The criteria of the law were tailored in order to target these organisations specifically and not affect others, and thereby to silence criticism on government policies.”

Peace Now said it intended to challenge the law’s validity in the Israeli Supreme Court.

“We will continue to fight this anti-democratic wave in the streets.”

Under the law, NGOs are now required to disclose details of overseas donations on various public platforms, including their websites, newspaper ads, campaigns and at government meetings.

Traditionally, these groups are known to receive overseas funds from European governments, including Denmark, Germany, Sweden, Switzerland and the Netherlands, as well as bodies such as the United Nations, among others.

In a statement published on his Facebook page after the vote, Israeli Prime Minister Benjamin Netanyahu said: “The purpose of the law is to prevent an absurd situation, in which foreign states meddle in Israel’s internal affairs by funding NGOs, without the Israeli public being aware of it.

“Unlike the left’s claims, the law’s approval will increase transparency, contribute to creating a discourse that reflects the Israeli public opinion, and will strengthen democracy.”

A list obtained by Israeli newspaper The Jerusalem Post in February, however, revealed that 25 of the 27 NGOs that will be affected by this law are left-wing, while two are non-affiliated.

The organisations listed include groups such as B’Tselem, Breaking the Silence, Yesh Din, the Public Committee Against Torture in Israel and the al-Marsad Arab Human Rights Centre.

When applied, NGOs said the law would mistakenly depict them as “minions of foreign governments”.

“The attempt to depict civil society organisations that receive public funding from abroad as proxies or agents of foreign governments is factually wrong and only seeks to delegitimise them in order to marginalise their impact in the country,” read a statement released in February by the Heinrich Boll Foundation, which relies on funds from the German government.

“What other explanation is there to the selective nature of a bill that calls for more transparency, yet deliberately leaves out private donors?”

READ MORE: Concern in Israel over bill on foreign-funded NGOs

The bill was first proposed in November 2015 by Ayelet Shaked, Israel’s justice minister and leader in the ultra-nationalist Jewish Home political party.

A previous version of the legislation stipulated it would be mandatory for members of such organisations to wear tags during Knesset sessions detailing their NGO name and the foreign involvement in their activities – a clause which was later removed. 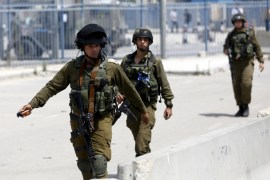 Israeli court will decide if Breaking the Silence should reveal identity of soldiers who provide anonymous testimony.