More than 100 people protesting against the deaths of African-Americans at the hands of police were arrested on Saturday and Sunday in Baton Rouge, Louisiana, where Alton Sterling – a 37-year-old black man and father of five – was killed by white officers on July 6.

His death was followed by the police killing in Minnesota of Philando Castile, a young black man who worked at a local school serving food to children.

On Thursday, five white police officers were killed during a demonstration by a suspect named as Micah Johnson, a former US soldier.

In an interview with CNN, Dallas Police Chief David Brown said that Johnson, 25, had used “shoot-and-move” tactics to shoot dead the five officers.

Brown said a search of Johnson’s home found that he had experimented with explosives, and other evidence suggested he wanted to use explosives against law enforcement officers.

“We’re convinced that this suspect had other plans,” he said.

Johnson, a veteran who had served in Afghanistan, took advantage of a spontaneous protest in Dallas over the two killings by police to launch his attack, Brown said.

Moving in front of the rally in a black Tahoe 4WD, the attacker stopped when he saw a chance to use “high ground” to target police, he added.

Before Johnson was killed by a bomb-equipped robot, he had sung, laughed and taunted officers, and said he wanted to “kill white people” in retribution for police killings of African-Americans, Brown said.

“He seemed very much in control and very determined to hurt other officers,” the police chief said.

Johnson’s military training helped him to shoot and move rapidly, “triangulating” his fire with multiple rounds so that police at first feared there were several shooters.

Brown also defended the police decision to use a bomb to kill Johnson, saying that “about a pound of C4” explosive was attached to the robot that delivered the fatal blast.

Thousands of people across the US have taken to the streets in recent days to protest against the police killing of black men.

On Sunday evening, protesters confronted police officers wearing gas masks in Baton Rouge where, according to reports, at least 48 people were taken into custody after demonstrators clashed with officers following a peaceful march to the state capitol.

In St Paul, Minnesota, 21 officers were injured on Saturday when they were pelted with rocks, bottles, construction material and fireworks.

Hundreds joined rallies in California, Colorado, Florida, Pennsylvania, Rhode Island and Utah. As many as 1,000 people joined a march in New York.

Three countries – the United Arab Emirates, Bahrain and the Bahamas – have warned their citizens to remain on guard when visiting US cities where protests occur.

US President Barack Obama, who attended a NATO summit in Poland on Saturday but cut his visit to Spain short by a day, has spoken daily during his trip about the Dallas attacks, calling for police and protesters to “listen to each other”.
Obama is expected to visit Dallas on Tuesday … to pay tribute to the victims of the police shootings.
Source : News Agencies 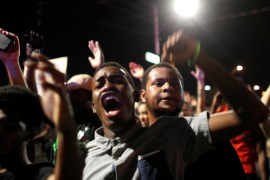 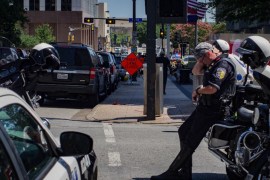 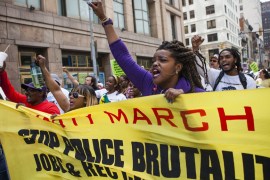 In Dallas, the Huey P Newton Gun Club organises ‘manoeuvres’ to show communities of colour they can police themselves.