Israeli police have been authorised to use lethal force as a first resort against Palestinians throwing stones, firebombs or fireworks, according to documents revealed by human rights group Adalah.

The latest open-fire regulations for Israeli police officers were approved and sent to officers in December, following two months of sporadic stabbing and vehicular attacks against Israeli civilians and security forces in Jerusalem, Israel and the occupied Palestinian territories.

The regulations include authorisation for officers to use live ammunition against Palestinians, including minors, suspected of throwing stones or firebombs, or those who appear likely to be about to commit such an offence.

It also gives police officers authorisation to use lethal force as a first option in such cases.

Previously, lethal force had been reserved as a final option for police officers when confronting violent Palestinian protests, only to be used after non-lethal means.

The regulations were partially revealed by the Israeli police to Adalah, the Legal Centre for Arab Minority Rights in Israel, after the NGO successfully petitioned an Israeli court for access to the documents.

On Monday, the group released excerpts which state that under the new regulations, “an officer is permitted to open fire [with live ammunition] directly on an individual who clearly appears to be throwing or is about to throw a firebomb, or who is shooting or is about to shoot fireworks, in order to prevent endangerment”, while the same response would be justified in a situation of “stone throwing using a slingshot”.

‘Unchecked’ use of force

Mohammed Bassam Mahajna, the Adalah attorney who filed the petition, said that the regulations “allow officers to act in an unchecked and criminal manner”, and permitted excessive use of force.

“The chances that actions such as stone throwing or shooting of fireworks would present a life-threatening danger are extremely slim and there is no doubt that it is possible to handle such situations using non-lethal means,” he said in a statement.

“The new regulations contradict existing general guidelines according to which the use of a deadly weapon by officers is permitted only when there is substantiated fear of danger to the life of an officer or other individual, and only if there is no other means by which this danger may be prevented,” he said.

The Israeli police spokesperson did not respond to Al Jazeera’s request for comment before publication.

Since September 2015, a number of Palestinians have been killed by Israeli soldiers and police while appearing to pose no immediate threat to life, in incidents that have made rights groups raise questions over officers’ excessive use of lethal force.

Israel’s security cabinet initially approved the measures in September 2015 after Prime Minister Benjamin Netanyahu had announced a “war” on those who throw stones.

The move brought the Israeli police force’s rules of engagement into line with the Israeli military operating in the occupied West Bank.

Israeli soldiers have faced criticism for the way they interpret the “threat to life” and their subsequent use of lethal force against Palestinians. In April, Israeli soldier Elor Azariya was charged with manslaughter after he shot to death a wounded Palestinian assailant in Hebron the previous month.

At least 214 Palestinians and 34 Israelis have been killed in a wave of violence that has rocked Israel and the Palestinian territories since October. 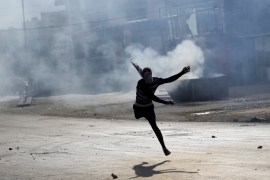 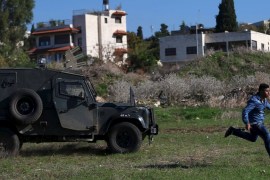 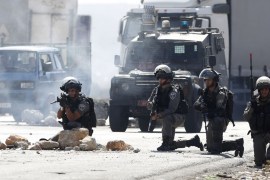