Prime Minister David Cameron is heading to Brussels to meet with EU leaders for the first time since Britain voted to leave the bloc.

He is expected on Tuesday to discuss the vote at an EU summit, while the other 27 leaders will gather for the first time without him on Wednesday morning to plan their next moves.

Cameron, who announced his resignation after losing the vote to remain in the union, will first sit down with EU President Donald Tusk, before the European Council meets later in the day.

Later, the British prime minister will “explain the situation” to his fellow leaders over a dinner, according to an invitation letter from Tusk.

The prime minister told parliament on Monday that he will not yet start the two-year countdown on leaving the EU by invoking the so-called Article 50 of the Lisbon Treaty.

“Before we do that we need to determine the kind of relationship we want with the EU. And that is rightly something for the next prime minister and their cabinet to decide,” Cameron said. His successor is not expected to be appointed until September.

The EU leaders are likely to stress a willingness to negotiate, but only after London binds itself to a tight two-year exit timetable.

The leaders of France, Germany and Italy met in Berlin on Monday and said Europe needed to respond to its people’s concerns by setting clear goals to improve security, the economy and prospects for young people.

German Chancellor Angela Merkel, who has appeared to take a softer line on Britain’s decision than some European leaders, said she will use “all her strength” to prevent the EU from further drifting apart.

She added that Britain “cannot expect to have no more obligations but keep priveleges” of EU ties.

European Commission chief Jean-Claude Juncker called Cameron on Tuesday to clarify quickly when Britain intends to leave the EU, saying there can be no negotiation on future ties before London formally applies to exit.

“I will see the prime minister later this morning … to ask him to clarify the situation as rapidly as possible. We cannot get into a period of extended uncertainty,” Juncker told the European Parliament, adding: “No notification, no negotiation”.

Cameron’s trip comes amid deep political uncertainty in Britain. His resignation announcement opening the way for a leadership contest within the ruling Conservative Party.

The decision for a Brexit – or British exit – also caused global markets to sink, sterling to drop to its lowest level in more than three decades, and it threw the opposition Labour Party into crisis.

Many expect a general election in the near future.

The political, economic and regulatory uncertainty is being felt across the globe at a time when economies are still slowly recovering from the 2008 economic crisis, interest rates are close to zero, and central banks have fewer tools than normal to revive demand if countries enter recession.

On Monday, there was still an air of confusion in Britain regarding leadership and the plan to leave the EU. Cameron ruled out, however, a second referendum on the issue, following calls to hold another vote.

“Who’s running Britain, and what now is the plan? That’s what everyone wanted to know as government ministers arrived at Downing Street, those who had voted to stay and those whose campaigning to leave had been the undoing of David Cameron. Not one said a word,” said Al Jazeera’s Laurence Lee, reporting from London.

“But the notable absentee from the meeting, Boris Johnson, used his newspaper column to argue in far more conciliatory terms that things may not be so different in the future, in particular that EU citizens in the UK will not have to leave, even though many Leave voters wanted exactly that. It was quite different from his tone before the vote.”

Johnson, a Conservative politician and former London mayor, had led the Leave campaign.

“I’ve seen a lot of confusion over the weekend about the status of people living in this country. It is absolutely clear that people from other European countries who are living here have their rights protected,” said our correspondent.

“All that people want to see is a system that is fair, impartial and humane to all people coming from around the world. To put it bluntly, there currently is no government and no opposition.” 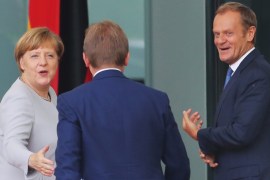