As millions of Britons heeded a call by right-wing politicians to leave the European Union, other right-wing and far-right parties across the continent have jumped on the victory for a Brexit.

Meanwhile, as some politicians and organisations celebrated the Brexit vote as a feat for sovereignty, others worried for the future of the Union.

Here are some reactions:

German Chancellor Angela Merkel called the vote “a watershed moment for Europe”. She added that the EU was strong enough to weather a Brexit.

European Parliament President Donald Tusk made a brief statement to media, saying that the group was determined to “keep our unity at 27 nations” and not have more defections. “What doesn’t kill you makes you stronger,” he said.

US Republican presidential hopeful Donald Trump applauded the UK’s vote to leave, saying “they took their country back, it’s a great thing”. He arrived at his Turnberry golf resort in Scotland, and said, “People are angry all over the world,” adding that worries about borders helped the Brexit vote.

Do you think a #Brexit will affect you? #EuRefResults

French President Francois Hollande said the Brexit vote was a “tough test for Europe”, adding that negotiations over Britain leaving the bloc should be swift.

Greek Prime Minister Alexis Tsipras said that a new vision is needed for a better Europe. “The extreme choices of austerity that widened the inequality between countries of the north and south, fences and closed borders and the denial to share the burden of the debt and migrant crises had signalled an extended crisis in Europe,” Tsipras said. “We urgently need a new vision and beginning for a united Europe – for a better Europe, more social and democratic.”

Hungary’s Prime Minister Viktor Orban  issued similar comments regarding immigration. The result showed how the British “can keep their island”.

Marine Le Pen , head of the aggressively anti-immigration, far-right National Front in France, tweeted : “Victory for freedom! As I have asked for years, it’s now necessary that France and all EU countries have a referendum.”

The Dutch right-wing, anti-Islam politician Geert Wilders called on the Netherlands to hold a referendum on whether to leave the EU.

Hurrah for the British! Now it is our turn. Time for a Dutch referendum! #ByeByeEUhttps://t.co/kXZ0aQtgmx

Czech Prime Minister Bohuslav Sobotka said the EU should agree to Britain’s leaving “quickly and rationally”. He added that the “European project needs much stronger support of its citizens”.

Poland’s Foreign Minister Witold Waszczykowski  is worried for the 850,000 Poles in the UK. “I can only give a sigh: so it’s done. This is bad news for Europe, bad news for Poles … The status of Poles living there will not change for now, but we don’t really know how much Britain’s status will be changed.”

Pavel Filip, Moldova’s prime minister, said the vote to leave was “a sad day for Europe”.

Brexit: What will happen next?

Manfred Weber , leader of the European People’s Party, the largest bloc in the EU parliament, said Britain should expect no free ride as it negotiates its departure.

“There cannot be any special treatment for the United Kingdom. The British people have expressed their wish to leave the EU. Leave means leave. The times of cherry-picking are over.”

He insisted that the exit negotiations “should be concluded within two years”.

Exit negotiations should be concluded within 2 years at max. There cannot be any special treatment. Leave means leave. #Brexit 4/4

Jean-Claude Juncker , the European Commission chief, said the EU will “not be bending over backwards” to help Britain in renegotiating trade deals with countries under the EU’s umbrella.

Taro Aso , Japan’s minister of finance, told an emergency press briefing that Tokyo was “extremely worried” about the risks to the global economy and markets, but stood ready to respond “firmly”.

German Foreign Minister Frank-Walter Steinmeier warned earlier this month that a British departure would be a shock requiring quick action to avert the “disintegration” of the bloc.

“It looks like a sad day for #Europe the United Kingdom,” he wrote on Twitter on Friday.

European Parliament President Martin Schulz said he expects negotiations over Britain’s departure from the European Union to begin quickly. “The United Kingdom has decided to go its own way. I think the economic data show this morning that it will be a very difficult way,” he said. 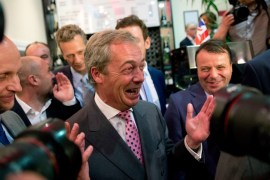