The chief of a village that became a symbol of resistance against corruption has been arrested for allegedly accepting bribes, Chinese authorities said, as a large police operation moved in to head off dissent.

Lin Zulian, detained on Saturday, was elected head of the Wukan village committee in 2012, after protests over land grabs led to rare concessions from the Communist Party and the ousting of local leaders.

The regional office for public security said Lin, who is 72 years old, had “used his power to elicit bribes”.

A resident told AFP news agency that a large number of police were present in the village on Saturday, with vehicles parked along the streets and military police posted outside the local station.

“Lin was arrested because he was planning on protesting on Sunday with villagers from the county,” she said.

She said corruption accusations were “just an excuse to arrest him.

“Since 2012 the government has promised to resolve the land problem but nothing has been done,” she added.

Just days before his arrest, Lin posted an open letter online pledging to launch a mass protest to demand justice for illegal land sales and unauthorised construction on village land.

Aware that the arrest could spark further protests, the public security office called for villagers to “cooperate with judicial authorities and maintain hard-won social stability”.

“Do not let a law-breaking minority encourage you to commit radical acts,” it warned.

Residents of the 13,000-strong fishing village in southern Guangdong province began protesting in 2011 in what was then seen as just another bout of social unrest in China, where land grabs have become a major source of discontent.

But when one of the protest leaders, Xue Jinbi, died in police custody, villagers took their demonstration a step further, barricading roads leading into Wukan and facing off with security forces for more than a week.

Then, unexpectedly, Communist Party authorities backed down and promised rare concessions, including pledges to investigate the land dispute and allow village polls to be held in an open manner – a first in Wukan.

Lin – who also led the protests and was provisionally appointed committee head after the incumbent was thrown out – was one of the successful contenders. 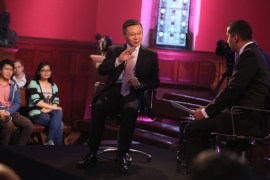 Is democracy wrong for China?