Wildfires are burning in four US states as temperatures are threatening record highs, with mass evacuations having taken place in California, Arizona, New Mexico and Utah.

A blaze known as the Dog Head fire broke out in rural New Mexico on Wednesday, around 50km southeast of Albuquerque. Torrance County Sheriff, Heath White said his office was evacuating about 200 people.

The fire has burned through timber in central parts of the state, pushing smoke towards cities more than 160km away as flames continued to spread.

Meanwhile, 400 homes and businesses have been evacuated in southern California as hot and windy weather feeds the flames.

“We want to get this fire out. We have wind and high temperatures expected,” Zaniboni said.

“With wind and low humidity, it’s a recipe for disaster when it comes to wildfires so we want to get on this thing as fast as we can.”

The Sherpa Fire, as it’s called, is located along the Pacific coast. Two state beaches and some ranch land have been evacuated, and the 101 Freeway had to be closed on Wednesday and Thursday.

The National Weather Service has issued excessive heat warnings across the southwestern states, including California, Nevada and Arizona.

It has predicted temperatures around 48C in the coming days in Phoenix. The all-time June record stands at 50C, set on June 26, 1990. 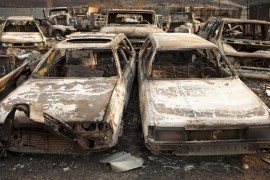 Wildfires in US state of Washington destroy 200 homes

Authorities scramble for resources to beat back flames as more than 12,000 homes in western state are threatened. 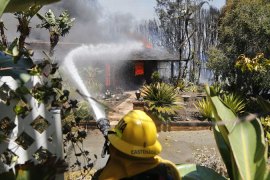 About 15,000 homes and businesses told to evacuate as wind-lashed wildfire roars through southern California community.