Evzoni, Greece – Tents dot the car park and field around the Hara Hotel at a weigh station in this Greek-Macedonian border town.

The number of refugees and migrants at this makeshift camp increased after Greek police evicted residents of the impromptu Idomeni border crossing last month, while others voluntarily moved to government-run camps.

On the other side of the road hundreds more are camping in the car park of a petrol station and in the forest behind it.

Speaking to Al Jazeera, many of the Hara Hotel’s outdoor residents are worried by threats that Greek police will clear the area and force them to join others in the Thessaloniki-area camps in the coming days.

Hussain Kazal, 25, and his 19-year-old cousin Ali came to Greece after fleeing mandatory military service in Syria earlier this year. The two sit next to a small camp fire where they cook potatoes in preparation to break their fast for Ramadan – the holy month for Muslims – in the woods across the street from the Hara Hotel.

Fleeing from war and economic devastation, people from Syria, Iraq, Afghanistan, Pakistan, Algeria, Morocco and elsewhere have ended up camping outside the Hara Hotel.

With the Macedonian border sealed for all refugees and migrants, Hussain and Ali are waiting for their chance to cross the border with the help of people smugglers.

“I’m not scared of dying,” he tells Al Jazeera. “You die when God decides it’s time for you to die. But I don’t benefit from raising arms against other Syrians; neither does Syria.”

From 4am till around 9pm, Hussain and others fast for the holy month. “From the time we are little until now, we are raised to fast, to pray, to do the right thing,” Hussain explains. “Ramadan is beautiful, despite these difficult conditions.”

Hussein and Ali are among the more than 55,000 refugees and migrants bottlenecked in Greece as a result of border closures in Macedonia and across the Balkans. They join a group of Algerians and fellow Syrians to eat as the sun sets.

The United Nations refugee agency (UNHCR) documented the arrival of more than one million refugees and migrants to Europe by boat in 2015. So far in 2016, at least 208,150 have made the dangerous sea journey across the Mediterranean.

After they finish the small feast – bread, salad and potatoes delivered by aid organisations earlier in the day – several people return to their tents to pack.

Frontex, the European Union’s border agency, has also patrolled the Greek-Macedonian border to block the flow of refugees and migrants.

They disappear into the dark fields lining the border. Yet, less than a half hour later, most of them return after being blocked by Greek police. “This is the routine here,” says Ali.

A Greek government spokesperson for refugee affairs was unavailable for comment.

Omar Muzin, a 26-year-old Syrian from Deir Az Zor, and his pregnant wife arrived at Hara Hotel a month and a half ago. He claims he has been caught by Macedonian police 21 times after crossing the border fence.

“It’s not that I’m stubborn,” he tells Al Jazeera. “But my wife is pregnant. What am I supposed to do?”

Sitting next to an electric outlet and charging his phone, he recalls his many attempts to make it to Western Europe. Across the car park a petrol station is crowned with a large sign that reads: “Welcome to Greece.”

On one occasion, Omar made it as far as Skopje, the Macedonian capital, only to be arrested and taken to a police station. They later drove him to the border and made him cross the fence back into Greece.

“They beat me up the first six times,” Omar says, explaining that he and his wife are now planning to make their way back to Turkey. “My wife will stay in Turkey and I’ll go back to Syria. It’s better to be able to keep your dignity. People here are just waiting to be evicted.”

Feeling like he has no other options left, Omar says he plans to go join the Free Syrian Army, a rebel group fighting the Syrian government and Islamic State of Iraq and the Levant (ISIL, also known as ISIS).

He lifts his telephone to show a picture of his brother, his eyes swollen and body blanketed in bruises after ISIL lashed him.

“I am going to return to fight,” Omar repeats solemnly, tears welling in his eyes.

According to Michele Pelaro of Doctors Without Borders, relocation from the Hara Hotel and other nearby refugee gatherings to government camps has been carried out on a voluntary basis.

“On Monday, the police communicated to the refugees that Thursday would be the last day they could stay in the area, but there has still been no evacuation,” Pelaro tells Al Jazeera, adding many refugees are still holding out hope to cross the border.

Yet, few make it across the border successfully with Macedonian police regularly beating and pushing them back, Pelaro says.

The following morning, 19-year-old Ali Raza explains that he arrived in Greece six months ago following a long journey from his hometown of Islamabad, Pakistan. “The food here is no good,” he tells Al Jazeera, sitting on a plastic lawn chair outside the hotel’s restaurant. “I am sleeping in a tent, and when it rains it’s very difficult.”

As Ali speaks, a group of men play cards behind him on a small patio table. Others argue about the best time to set out for the Macedonian border. He recalls cutting the border fence and crossing the border into Macedonia six times. Macedonian police arrested him and sent him back to Greece each time.

Across the highway, Greek police attempt to convince refugees to board a bus to government-run camps in the port city of Thessaloniki. Ostensibly rented from a tourism agency, the busses read: “Crazy Holidays.”

“I won’t go back [to Pakistan] … there’s no future,” Ali concludes, arguing it is his only chance to get a job and help his family back home. “I will go to Macedonia. [Then] I want to make it to Italy.” 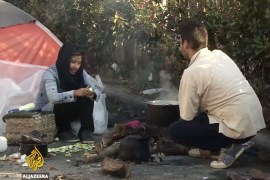 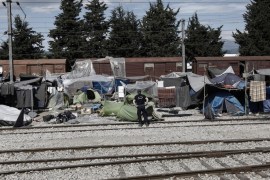 More than 2,000 refugees and migrants so far moved from makeshift camp on Macedonia border to shelters in Thessaloniki.