Millions of Muslims around the world are marking the start of the holy month of Ramadan on Monday, a time marked by intense prayer, dawn-to-dusk fasting and  good deeds .

Religious authorities in most Middle Eastern countries announced the new moon of Ramadan was spotted on Sunday evening.

Indonesia, the world’s most populous Muslim country, said Muslims there would begin fasting on Monday, as will Muslims in Singapore, Yemen, Lebanon, Syria, Qatar, Kuwait, Jordan, Egypt, the United Arab Emirates, Afghanistan and the Palestinian territories, among others.

Following these announcements, a mosque in Tampa, Florida, announced to its followers that they too would celebrate the first day’s fasting on Monday.

The sighting of the new moon marks the beginning of the Muslim lunar month that varies between 29 and 30 days.

Some countries use astronomical calculations and observatories, while others rely on the naked eye alone, leading sometimes to different starting times in the Middle East.

Muslims believe Ramadan to be the month in which the first verses of the Quran, Islam’s holy book, were revealed to the Prophet Muhammad more than 1,400 years ago.

The faithful spend the month of Ramadan in mosques for evening prayers known as “taraweeh”, while free time during the day is often spent reading the Quran and listening to religious lectures.

Each day for the month of Ramadan, Muslims abstain from eating, drinking, smoking and sex from sunrise to sunset to focus on spirituality, good deeds and charity.

There are exceptions to fasting for children, the elderly, the sick, women who are pregnant, nursing or menstruating and people travelling.

Many break their fast as the Prophet Muhammad did around 1,400 years ago, with a sip of water and some dates at sunset followed by prayer.

READ MORE: Ramadan in the shadows: Fasting while poor

It is common for Muslims to break their fast with family and friends and charities organise free meals for the public at mosques and other public spaces.

Families and friends get up early for suhoor, the last meal eaten before the sun rises, and at the end of a day of fasting, gather for iftar, the breaking of the fast at sunset.

The fast is intended to bring the faithful closer to God and to remind them of the suffering of those less fortunate.

Fasting during Ramadan is one of the five pillars of Islam, along with the Muslim declaration of faith, daily prayer, charity and performing the hajj pilgrimage in Mecca.

In many Muslim countries, offices are required by law to reduce working hours and most restaurants are closed during daylight hours. 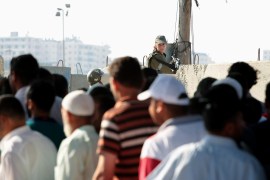 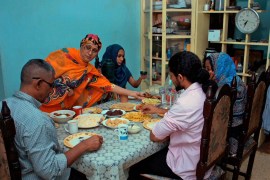 An intimate look at the holy month of Ramadan through the eyes of Muslims living in a predominantly Christian country. 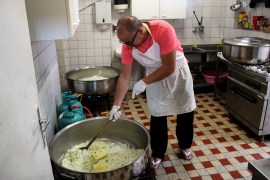 Austrian Ramadan: a taste of kindness and a free meal