Beirut – A new Arabic version of the award-winning app ShareTheMeal has been launched to mark the beginning of the holy month of Ramadan. The app allows users to feed a Syrian refugee child for a day at the touch of a button.

The World Food Programme (WFP) app invites users to donate as little as 50 cents at a time, to help feed hungry communities around the world.

The English and German versions of the app were launched last November, and thus far 5.5 million meals have been donated by some 500,000 users.

The current campaign is aimed at feeding 1,400 Syrian refugee children between the ages of three and four in Beirut for a full year. Earlier campaigns have fed schoolchildren in Lesotho, refugee children in Jordan and breastfeeding and expectant mothers in Homs, Syria.

INTERACTIVE: The Syrian refugee giving back to Germany

Currently, poor nutrition accounts for 45 percent of deaths in children under the age of five around the world, according to the WFP. The need for an Arabic version of the app was a practical decision, Sebastian Stricker, founder of the app, told Al Jazeera.

“If we want to use this tool for people to do good, we need to see that people really can and like to use the app. And language is obviously one of the most important things here.”

Ramadan, which begins on Monday, was the perfect time to launch the new app, he said, as it is a time when many Muslims choose to donate to charity, zakat being one of the five pillars of Islam.

“When you give zakat you are obeying what God ordered us to do,” explained Sheikh Mohammad Arwadi, a member of Lebanon’s Higher Islamic Council. “You can do it whenever, but most people do it during Ramadan, because it is a month of praying to God and doing good things and helping others,” he added.

Aside from zakat, which is obligatory and calculated as a percentage of capital, Muslims can also donate whenever else they choose – sadaqah.

There are some one million registered Syrian refugees in Lebanon, but the real number is far higher – around 1.5 million, according to the WFP. Per capita, Lebanon has the highest number of [Syrian] refugees in the world.

“This is the highest density of refugees per hosting population,” Dominik Heinrich, WFP’s Lebanon country representative, told Al Jazeera. “It’s not unfair to say that Lebanon is doing a marvellous job.”

WFP in Lebanon supports 700,000 of the most vulnerable of these refugees, as well as 20,000 impoverished Lebanese, Heinrich said, figures chosen based on the agency’s evaluations.

Lebanon was picked for the current campaign due to a combination of factors, Stricker said. “We wanted to go where there is a significant need, and we wanted to make sure that these are programmes which are executed well, and where the money is being put to good use.”

Each time a user donates a meal (or several meals at a time), paid via debit or credit card, or by PayPal, this goes toward electronic vouchers for Syrian refugee families in Lebanon.

These can then be used at certain shops across the country, and the minimum donation, 50 cents, is enough to feed a child for a full day, Heinrich said.

Individuals supported receive $27 a month, which is most commonly spent on oil, rice, pulses and some fresh vegetables, Heinrich added. Only once or twice a month families can afford to buy chicken or meat – “They are living in subsistence mode.”

Having looked at when users currently click the donate button, “What we like is that people really share the meal during lunchtime or dinner time,” Stricker said.

With the launch of the new app, he is intrigued to see if it will happen during Ramadan at sunset, when followers break their fast with an iftar meal.

Stricker, who used to research hunger for WFP, believes that a world without hunger is possible. “It’s something we feel really strongly about, and we totally believe that a zero-hunger future is possible,” he said.

He added, however, that while it might be possible to combat chronic hunger, unforeseen events such as violence and natural disasters will mean acute hunger is unavoidable.

“The beautiful thing is that you and I are likely to see a world without chronic hunger, if you just look at the last couple of years,” Stricker added, explaining that in 1990 one in five people in the world were hungry, but by 2015 this had fallen to one in nine.

If you extrapolate the data, Stricker said, zero-hunger will happen somewhere around the middle of the century, “so if you don’t want to wait until 2050, you have to invest now.”

The ShareTheMeal app is available for download on Google here and on Apple here. 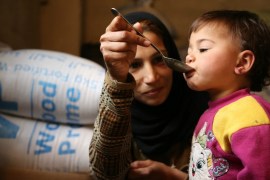 Launched by the WFP, the app allows smartphone owners to provide vulnerable kids in refugee camps with vital nutrition.