At least 26 people have been killed in regime air strikes in Syria’s Deir Az Zor province, activists and a monitoring group has said.

Women and children are among those killed in the air raids that targeted a busy market in the suburbs of Deir Az Zor city, the UK-based Syrian Observatory for Human Rights reported on Monday.

The observatory said that the death toll is expected to rise.

The market, which is located in Shaara town, is considered one of the main markets in the area and provides resources to several other towns in the suburbs.

Meanwhile, government forces have clashed with the fighters from the Islamic State of Iraq and the Levant (ISIL) near Deir Az Zor airport, the observatory added.

The attack comes as the Syrian army crossed the boundary of Raqqa province after advancing in a major Russian-backed offensive against ISIL, the observatory reported on Saturday.

Heavy Russian air strikes hit ISIL-held territory in eastern areas of Hama province, near the boundary of Raqqa, on Friday to help the Syrian army’s advance.

The UK-based Observatory said at least 26 ISIL fighters and nine Syrian government and allied troops were killed in the fighting.

It was the first time that government troops had entered Raqqa province since they were expelled by ISIL fighters in August 2014.

WATCH: Is there still a political way out of Syria’s crisis?

It has since evolved into a full-on civil war that has killed at least 270,000 people, according to the observatory. 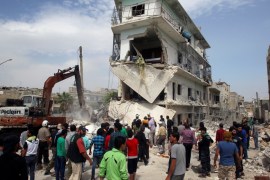 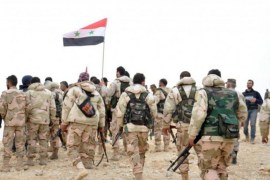 Government sources say military forces have recaptured hospital after it was taken by ISIL fighters. 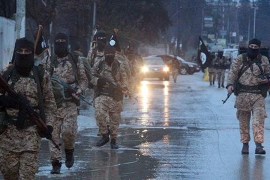 Reports say hundreds of people, including pro-government fighters and their families, have been abducted or killed.