Dubbed the ‘I Protest’ movement on social media, the demonstrators have marched against alleged corruption, the government’s alleged wire-tapping of up to 20,000 people and presidential pardons given to 56 politicians and businessmen facing criminal charges.

READ MORE: Macedonia – Behind the Facade

In May, President Gjorge Ivanov revoked 22 of those pardons as pressure mounted.

The uprising has also been called the “Colourful Revolution”, a reference to activists’ splattering of paint on government buildings and state-funded statues that they view as emblematic of widespread corruption.

With the exception of Sundays, protests have continued daily for 53 days.

Though police have been restrained during protests, at least 64 activists were interrogated in the southwestern city of Bitola and seven others charged with felonies in the capital Skopje, according to activists.

As more than 500 people marched through the Macedonian capital on Friday night, Al Jazeera spoke to several demonstrators about what the ‘I Protest’ movement means to them.

I’m tired, but I’m still standing. I have been coming since the beginning. I was even hit by a police officer. We were protesting and the situation got out of control. I was not doing anything. I was just standing on the side. But he was just hitting everyone in his way. That was on April 13.

This all needs to stop. We want justice, freedom and democracy. Our president is incapable of doing anything because he is only taking orders from [Prime Minister Nikola] Gruevski.

He wants to save himself from the crimes that he commits and from accountability for the corruption in our institutions.

They want to destroy us because we are fighting for our rights. The [Macedonian] media is corrupt. Most of it is government-owned, and it only tells Gruevski’s side.

I haven’t been arrested yet, although there have been several occasions [I could have been]. We have been protesting every day for more than 50 days. The form of protesting has changed.

In the first few days, it wasn’t organised and we were just going out in the streets. There was a bit of violence, but it was nothing compared to the rule of these people for the last 10 years.

That’s why I can’t describe us as violent. We are just saying what we think about the government and the 10 years we’ve been oppressed by them.

The government is worried. If it wasn’t worried, it wouldn’t need to arrest people. Of course, we will be able to keep it up. I am optimistic.

I have been protesting for 32 months, since before the protests started. First, I was in front of the court and the Ministry of Justice, and now I’m here. The government confiscated my land and building. They are going to build something else on top of my land.

There are thousands of people with cases similar to mine. I think as long as the current government is in charge, we are not going to get any justice. I’m still optimistic for change.

That’s why I’ve been standing here for more than two years.

I was charged with involvement in 3,400 euros worth of damage to the Ministry of Culture and an arch in the city centre. That was just for throwing paint.

I learned about the charges when I saw my name in the media.

The [officials] should be ashamed of themselves. They know what they are doing is wrong. It is a pity.

I am not trying to get personal gain out of this except for the freedom for all of Macedonians. I am proud of what we are doing and I hold my head up high.

I’m here every day from 6pm until the protest ends. I’ll keep coming every day. I’m hoping for a better future here in Macedonia, and for the rule of law and human rights.

I hope every criminal gets what they deserve, such as prison time. I’m hoping for a better future in every way in Macedonia. That’s why we are fighting.

The [government officials] are criminals – and that’s why this is very dangerous.

They don’t want to show it, but they are scared. We know it because we see the fear in their faces when they give speeches about us.

I want to continue my studies in international law so I can represent my country in a way it deserves – as a free and democratic country.

They tried to arrest me a week ago. Fortunately, I was not home at the time. They accused me of throwing paint at the parliament.

From the beginning, I was fed up with people stealing from us and treating us like we are stupid. They say a fence next to the old bridge cost $4m – maybe if it was made out of platinum and gold.

They are stealing everything from this country. They are taking assistance from the International Monetary Fund, but I think they kept more than 70 percent of the money for themselves.

I started protesting last year when the wiretapping recordings came out. One recording was about the police covering up a murder. Before that, I was not really sure. But wouldn’t you be motivated? 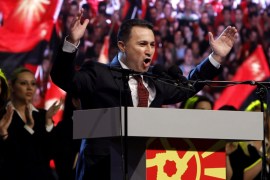 Macedonia on a road to nowhere

Our correspondent describes the mood in Skopje as rival crowds face-off amid allegations of corruption against the PM. 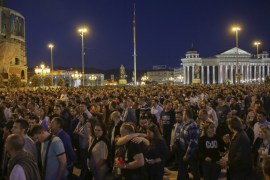 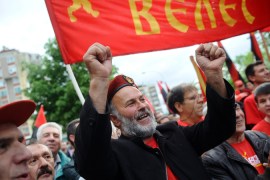 Nikola Gruevski, in power since 2006, credited for economic growth, but opposition claim his rule is authoritarian.