Thai authorities have removed dozens of tigers from a Buddhist temple that operated an admission-charging zoo after allegations of wildlife trafficking.

The director of Thailand’s Wildlife Conservation Office, Teunjai Noochdumrong, said on Tuesday that 40 out of 137 tigers were tranquilised and removed from the temple in Kanchanaburi province west of Bangkok.

“There was some resistance from the community. They didn’t understand why we were taking them [the tigers] from the temple when they look so peaceful and fine at the temple,” said Teunjai.

“We tried talking to them, explaining to them that the tigers belong to the country.”

The temple promoted itself as a wildlife sanctuary, but in recent years it had been investigated for suspected links to wildlife trafficking and animal abuse.

Animal rights activists have long accused the temple of mistreating the tigers, while some visitors have said the animals can appear drugged.

The temple denies the accusations.

The monks had turned back previous attempts to take the tigers away, and continued to resist on Monday morning. But they gave up on Monday afternoon after police obtained a court order to carry out the action.

The tigers are being taken to government animal shelters elsewhere in the country.

Thailand has long been a hub for the illicit trafficking of wildlife and forest products, including ivory. Exotic birds, mammals and reptiles, some of them endangered species, can often be found on sale in markets.

The government introduced new animal welfare laws in 2015 aimed at curbing animal abuse, but activists accuse authorities of not enforcing the legislation. 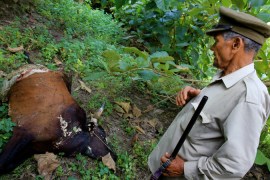 India: Last of the Tigers

Conservationists are in a desperate and uphill battle to save India’s tigers from extinction. 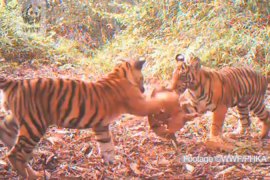