Intense fighting between Philippine troops and a little-known group apparently inspired by the Islamic State of Iraq and the Levant (ISIL) has killed 54 fighters in the country’s south, officials said.

He said two soldiers were killed and nine others wounded in the clashes.

The military fired artillery and launched air strikes “to get the criminals” behind the beheading last month of two sawmill workers, Tan said.

He said the workers were forced to wear orange robes while being beheaded, like victims of ISIL, also known as ISIS. Four other sawmill workers were freed after their employers negotiated with the captors.

Troops have not retrieved the fighters’ bodies, but based the count on intelligence reports and on sightings of bodies being carried away by other rebels, Tan added.

Local reports said at least 1,200 people were forced to evacuate during the fighting.

In February, the group attacked an army outpost in Butig, sparking days of battles that killed 24 fighters and six soldiers, one of whom was beheaded.

Authorities said the group has used black clothing with the symbol of the ISIL group in Syria and Iraq.

Several small factions in the southern Philippines, the home of minority Muslims in the largely Roman Catholic country, have expressed support for ISIL in online videos, but the military says there is no evidence of any direct, active collaboration. 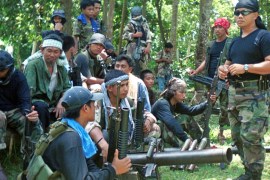 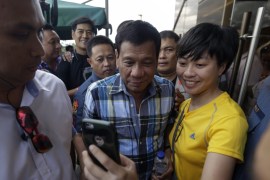 Controversial mayor, known as The Punisher, gets more than 16 million votes after campaign pledge to kill criminals.