For the third time in a week, an armed group has attacked a major pipeline in Nigeria’s Delta region, two officials have said, hours after the Niger Delta Avengers group claimed responsibility for the attack.

“I am aware that there was a dynamite attack on the pipeline,” Nengi James, chairman of the Nembe Oil and Gas Committee, told AFP news agency.

“This could not come at a worse time for the government of Muhammadu Buhari who vowed to crush militancy and  bring down the level of violence in Nigeria, firstly by tackling Boko Haram. And now another front has been opened for the Nigerian security agencies in the Niger Delta.

“This has effectively cut off supplies and exports, there are lots of oil companies who have said that they cannot deliver some of the promised goods to customers or buyers outside the country. Right now military operations have been taking place in the Delta region,” Idris said.

The NDA appeared to claim the Saturday attack on a Twitter account bearing its name in a post that said it had blown up the “Nembe 1, 2 and 3 Brass to Bonny trunk line” at 2:15am.

A follow-up posting threatened “something big is about to happen”.

Earlier attacks attributed to NDA this week have seen Chevron and Nigeria’s state-owned oil and gas infrastructure blown up.

Continued violence could result in mass evacuations of staff that would “cripple onshore production of about one million barrels per day,” Philippe de Pontent, sub-Saharan Africa analyst at political risk research firm Eurasia Group, said in a recent report.

Like other groups before it, the NDA wants a fairer share of oil revenues for the impoverished and polluted southern region.

The group claims that the majority of the country’s oil wealth is owned by people from the country’s north and has plans to realise an independent state by October 2016, according to online statements credited to NDA spokesman Murdoch Agbinibo.

In response to the sabotage, southern government officials this week urged President Buhari to enter a peaceful dialogue with Niger delta communities instead of using military force to restore oil production.

The Nigerian government has issued an arrest warrant for Tompolo, alleging that the former leader of the Movement for the Emancipation of the Niger Delta (MEND) stole millions of dollars from the federal government after he started working as a security contractor as part of an amnesty programme.

There are rumours that Tompolo has been orchestrating the NDA attacks, but he has denied any collaboration.

According to Oporoza resident Raphael Gbenekama, more than seven gunboats loaded with armed soldiers invaded the community, shooting and beating up residents while arresting others.

“As I speak with you, I am in the bush where I am taking refuge,” Gbenekama told AFP.

“The whole community has fled and those who could not run have been rounded up and arrested, but I can tell you that we do not harbour criminals. Our people are innocent,” Gbenekama said.

Previous crackdowns on armed groups in the past were ineffective and the chaos in Nigeria’s southern swamplands was only restored after the introduction of a costly amnesty programme for the rebels. 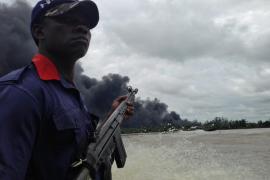 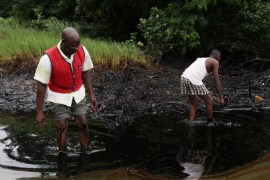 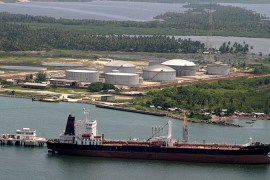