Ramallah, Occupied West Bank –  Last month, Mohamad Aref Hiles, 24, was supposed to travel from his home in the West Bank to Sweden to get married. Due to Israel’s travel restrictions for Palestinians, however, Hiles, like most Palestinians who travel abroad via another country’s airport, travelled through Jordan. There, he was shocked to discover that the Jordanian authorities had barred him from reaching his final destination. And he missed his wedding.

Amani al-Halaq is a similar case. Last January, she was travelling to Qatar to receive an award for a mobile translation application she had created but she could not get out of Gaza due to travel restrictions.

Both Palestinians had visas issued by the countries they were trying to reach, a feat in itself. Yet, they were prohibited from travelling because of what Human Rights Watch describes as ‘a quiet policy’ implemented by Jordan since last year that bars Palestinians from moving through the Hashemite Kingdom on to final destinations.

“The problem is extremely widespread,” Sari Bashi, the Palestine director for Human Rights Watch, told Al Jazeera. “To be fair, Jordan didn’t create this. Israel is the one that has blocked all of the ports and exits out of Gaza, and up until recently Jordan played a very important role in facilitating through-travel for Palestinians seeking trips abroad.”

HRW began investigating the permit refusals after receiving 58 complaints filed between August 2015 and January 2016. In many cases, HRW said that the Jordanian authorities failed to notify Palestinians that they were being denied a travel permit. “This is just the tip of the iceberg,” Bashi said. In some instances, Palestinians were sent refusals by text-message.

Most Palestinians living in the West Bank do not need special documents from Jordan for entry. Those who lived in the territory when it was under Jordanian control, between 1948 to 1967, and their heirs, many of whom were given Jordanian passports, can pass freely.

Even on a good day it's a travesty for a Palestinian to travel, but this is a result of the siege and the occupation.

However, the 1.8 million Palestinians in Gaza, and the Palestinians in the West Bank, who relocated by the thousands with the return of the Palestinian Liberation Organisation in the 1990s, must obtain a “no objection” letter from the Jordanian consulate in Palestine before embarking on international travel, in order to be granted passage through Jordan.

In the West Bank, this effects between 50,000 to 100,000,  Bashi said. She noted that HRW had tried to find the exact number of West Bank Palestinians with this status, but  the Israeli, Palestinian, or Jordanian governments were unable to provide the data.

The rights group told the Jordanian prime minister’s office that they had found a “wide-scale refusal or non-responsiveness to requests for the no-objection letters”.

“Israel doesn’t allow Palestinians to operate an airport or a seaport, so to travel abroad Palestinians have to use another country’s airport,” Bashi said, explaining why Palestinians from Gaza will take lengthy trips through two Israeli-controlled crossings in order to fly out of Amman’s airport.

Last March, Israel announced an easing of travel regulations and said it would increase permits for a first time in two decades for Palestinians wanting to leave Gaza via the northern Erez checkpoint. The change in policy included a limitation where Gazans could not return home for at least a year.

However, the Palestinian Centre for Human Rights, a Palestinian rights group, disputed the Israeli claims that it has eased the closure of the Gaza Strip. Palestinians originating from Gaza need two travel permits to reach the Allenby border with Jordan: One from Israel to leave and one from Jordan to enter.

Some Palestinian travellers from Gaza found themselves with a valid Israeli exit permit, yet no entrance visa from Jordan. “People who in the past had travelled and got transit letters, no longer can,” Bashi said.

Jordan’s Minister of Media Affairs, Mohammad al-Momani, denied the HRW claims saying that travel services for Palestinians continue as normal. “What Jordan offers to our Palestinian brothers is not offered by any other country in the world and we continue to help them on all levels, including the humanitarian effort of freedom of movement,” said al-Momani in a statement to Al Jazeera.

In 2015, Jordan facilitated the travel of more than 10,000 Palestinians, a Jordanian official said this week.

A spokesman for the Palestinian Authority, Jamal Dajani, confirmed to Al Jazeera that there was no dispute between Amman and Ramallah, and that both parties had discussed the issue of the Palestinians’ travel ban in a recent conversation.”We appreciate that Jordan always sides with the Palestinians on those issues,” Dajani said, adding that the core difficulties for Palestinians wanting to leave Gaza is the responsibility of Israel as the occupying power.

“Even on a good day, it’s a travesty for a Palestinian to travel, but this is a result of the [Israeli] siege and the occupation,” Dajani told Al Jazeera.

READ MORE – Palestinian without ID: ‘It’s like I don’t exist’

Yet individual Palestinians, with transit permits rejected by Jordan during the last year, say Jordan is compounding their limitations to movement. “Personally, the ban put me down at first. But I still believe we can make it,” said Halaq of Jordan’s refusal to allow her to reach Qatar where she would have been given a scientific innovation award.

For Palestinians from Gaza wanting to go to a foreign country, travel was limited before the Jordanian policy. A general tightening was implemented after Hamas won the 2006 elections and Israel subsequently began its now decade-long blockade. From that point on the main thoroughfare to the outside world for Palestinians in Gaza was the southern Rafah crossing into Egypt.

With the dramatic halt of movement through Gaza’s crossing into Sinai, Palestinians began looking to Jordan as their only reasonable means of exiting the Strip. “There has been a shift in policy from an easing of restrictions to a sudden halt in all permissions,” says Deema el-Ghoul, an HRW researcher. She added that among Palestinian travellers, Jordan’s frequent permit denial is “common knowledge now”.

Meanwhile, and despite the fact that Halaq could not attend the event that could have been a career game changer, she remains hopeful.

“We didn’t make it this time but hopefully we can next time,” she said. “You can find the app on Google. It’s called ‘Araby’. We are still developing the app for the [Apple] app store.” 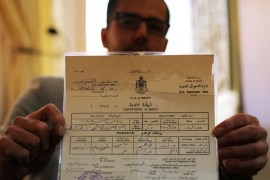 Israel refuses to grant an ID number to Khalid Yasin, even though he has lived in the West Bank for over two decades.