This year a gay rights activist and members of minority groups such as Hindus, Ahmadi and Shia Muslims have been fatally attacked.

Islamic State of Iraq and the Levant (ISIL) has claimed responsibility for some of the attacks, but the government denies the armed group’s role.

But who are these groups? Are they home-grown or linked to ISIL or al-Qaeda?

Al Jazeera spoke to Ali Riaz, a professor at Illinois State University to get a sense of the situation. Professor Riaz is from Bangladesh and has written extensively on politics and armed groups in Bangladesh.

Which groups are behind the killings of bloggers and activists in Bangladesh?

The first killing of bloggers was reported in 2013 in the wake of Shahbagh movement. For most of those killings, the Ansarullah Bangla Team (ABT) claimed responsibility. The ABT claims to be connected to al-Qaeda in the Indian Subcontinent (AQIS). However, these militant groups were present even before 2013.

On the other hand, responsibilities for the killing of foreigners, attack on the Shia mosque, and threatening some priests have been claimed by the Islamic State of Iraq and the Levant. Later ISIL media Dabiq ran a piece where it claimed to have established contacts with a Bangladeshi militant group called the Jamaat-ul-Mujahideen Bangladesh (JMB), and that they are working together.

Here is my take: Militant groups have been active in Bangladesh for a long time, their presence is nothing new. Since the mid-1990s, we had seen the presence of militant groups. We saw spectacular attack in 2005 carried out by Jamaat-ul-Mujahideen Bangladesh. The group was banned even before those attacks. A counterterrorism strategy was adopted and to a great extent it succeeded.

The counterterrorism strategy adopted during the 2007-08 caretaker government largely succeeded in keeping groups such as JMB and other minor groups in check. But since 2013, what we are witnessing  that counterterrorism efforts have began to falter. It seems to have been used for political point-scoring.

One should not be involving immediate political gains to counterterrorism strategy. Counterterrorism and national security should always be above and beyond domestic petty politics.

What is your take on the government claim that the opposition Bangladesh Nationalist Party (BNP) and the Jamaat-e-Islami party are behind the recent killings of bloggers?

The government has been trying to put the blame on BNP and Jamaat-e-Islami. Yes, Jamaat was behind political violence, in the wake of war crime tribunal verdicts in February 2013 and later it has perpetrated violence. But as of now I have not seen anything that conclusively points to the involvement of the Jamaat-e-Islami as an organisation to these attacks.

Is there a presence of ISIL in Bangladesh?

In the past years, the government claimed that they had arrested ISIL recruiters, these arrests were meant to demonstrate that it was fighting terrorism and that it was winning.

Perhaps, later the government realised that by doing so, they were implicitly admitting the presence of ISIL, which indirectly means it’s failing. The government started backtracking.

At this point, ISIL as an organisation might not be present, but definitely there are people in Bangladesh who are aspiring to be part of it. We can say that because we have seen robust online presence of these radical elements in Bangladesh, they want to be part of ISIL.

What are chances of local groups joining hands with ISIL?

You cannot say it has happened, but you cannot say it won’t happen either. It’s a matter of time and opportunity that such groups establish contacts with ISIL. If that happens this would be a dramatic shift. It is likely that it would happen at some point, if the present situation continues.

What is fuelling the rise of armed groups?

There is no single reason, but several issues are coming together. The government tried to club Jamaat, JMB and al-Qaeda together. I think that is detrimental to the counterterrorism efforts. This might create the space for fringe militant groups to proliferate.

You have to put all these things into the context of domestic politics. If you keep on pushing the legitimate opposition into the corner, it tends to make room for fringe militant groups. Their message, though not acceptable, may resonate with some people.

These militants can tell people, there is no way you can be a part of the mainstream politics. That’s why we can say that shrinking democratic space creates an environment where radical elements find sympathetic ears.

Is extremism growing in Bangladesh? If yes, why?

My reading is different from the conventional interpretations. Let me try to explain. Within Bangladesh, there is a growing extremism, please note I am not saying growing Islamist extremism. Extremism of various kinds.

In the past few years, Bangladesh’s mainstream parties have resorted to violence on various occasions. The rhetoric has become violent as well, whereas in the past political rhetoric largely used to be moderate. If you continuously use violent rhetoric, it is bound to have an impact on the society. I think that violent and intolerant rhetoric are making Bangladeshi society more violence prone.

If you keep on using very extremist language, if it is being used by both sides of the issues, whether it’s the opposition or the ruling party, secularists or the Islamists – eventually society will become radicalised.

My point is that extremism has crept into the political discourse, into political rhetoric and has made violence a “normal” activity. We have witnessed violence during the 2013-14 election and after the elections, perpetrated by the opposition parties, but the government also responded with a very heavy-handed approach.

What is the role of current government of Prime Minister Sheikh Hasina?

All these things are happening in the context of the flawed elections in 2014, and an increasingly shrinking of democratic space and of course, limits imposed on the freedom of speech.

We have seen rampant use of the Information and Communication Technology Act under which people have been arrested for allegedly hurting religious sentiments or posting things online critical of the government.

Religious extremists are not allowing any open discussions on Islam which challenges their interpretation. So if you take all these things together you can see the impacts. As I said, there isn’t one single element, but various elements coming together and you cannot consider these attacks separated from the overall picture.

What needs to be done to check the trend?

There are armed groups, which are ideologically committed to fanaticism and their skewed interpretation of religion. Sectarianism, which was pretty much absent, is expanding, and becoming a part of the social fabric.

As of now, my understanding is that given that the global environment is conducive for these kinds of extremism or militancy, unless it is addressed properly, there is a huge risk of proliferation. Some are saying it has not reached an unmanageable level; they cannot ignore that, definitely it has reached an alarming stage. It needs to be addressed in earnest.

There should be a comprehensive strategy to address the menace. Simply apprehending the militants, simply using coercive apparatus like police, paramilitary forces and other law enforcement agencies are not going to do the job, it has not worked elsewhere in the world.

Is there any connection between the growing violence and the International War Tribunal verdicts?

I would not put direct connections between the international tribunal and the growing militancy. There is enormous support for the tribunal. Bangladeshis want those who committed war crimes in 1971 be tried, although concerns have been expressed at the international and domestic levels regarding procedural aspects of the trials. Nobody has ever questioned the legitimacy of these trials. Bangladesh need to have a closure.

I think that militancy issue should be viewed as counter terrorism issue but contextualized within the overall political environment which is creating enabling environment for the militants to flourish. 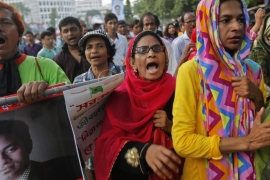