A United Nations panel against torture has expressed concerns about allegations of “excessive use of force”, including deadly force, by Israeli security forces in Palestinian areas, and warned authorities about barring access to detained suspects, including minors.

The Committee Against Torture, which works under the office of the UN human rights chief, released its “concluding observations” about Israel and five other countries as part of regular reviews by the panel.

The panel, which generally conducts reviews of assenting countries every four or five years, does not have investigative or fact-finding powers of its own and relies mostly on information from the media, advocacy groups, UN and other sources in drawing up its findings.

In a 12-page segment on Israel, the committee pointed to “allegations of excessive use of force, including lethal force, by security forces” at demonstrations, in response to attacks or alleged attacks against Israelis and it took aim at Israel’s controversial policy of administrative detention, under which it can arrest suspects and hold them without charge for months at a time.

The committee also said that it was “gravely concerned that solitary confinement and separation can be applied to minors”.

Israel has defended the system of administrative detention as a necessary tool in preventing Palestinian attacks.

Human rights groups and Palestinians have alleged that Israeli forces have often been quick to pull the trigger, rather than trying to subdue suspects.

Israel says the violence is fuelled by a campaign of incitement by Palestinian religious and political leaders, compounded on social media sites.

Palestinian officials say it is the result of despair living under Israeli occupation and frustration over the prospect of ever reaching statehood. 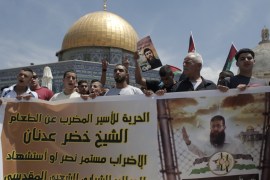