Muslims in Iran could miss out on the annual Hajj pilgrimage to Saudi Arabia this year as Tehran and Riyadh trade blame over a failure to agree organisational details, according to media reports.

A delegation from Tehran held four days of talks in Saudi Arabia last month, aimed at reaching a deal for Iranians to go for Hajj, which will take place in September.

The Saudi Hajj ministry, however, said Tehran’s delegation had refused to sign an agreement laying out arrangements for this year’s pilgrimage, according to a statement carried by state-linked news site Sabq.

Last year’s Hajj was marred by the death of at least 769 pilgrims, many of them Iranian, in a stampede at Mina on the outskirts of the holy city of Mecca.

“The arrangements have not been put together and it’s now too late,” said Jannati, whose ministry oversees arrangements for Iranian pilgrims.

But a statement carried by Sabq said that Iran’s demands included the granting of visas inside Iran and transport arrangements that would evenly split the pilgrims between Saudi and Iranian airlines.

“Iran is the only country that refused to sign the agreement on the Hajj. It insisted on a number of unacceptable demands,” Minister of Hajj and Umra Mohammed Bintin told Saudi state TV channel Ekhbariya.

Saudi Arabia and Iran severed ties after protesters in Iran attacked Saudi diplomatic missions there following the execution of a prominent Shia cleric in Saudi Arabia.

Jannati said the Saudis “did not accept our proposals on security, transportation and visa issuing for Iranian pilgrims”.

A culture ministry official said Iran was “very concerned over the security of Iranians during the holy ceremony” and that talks with Saudi authorities were continuing. 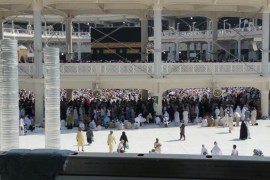