“The worst was the first day I arrived in Abu Ghraib, how they forced me to strip … naked in front of everyone,” said Ejaili. “They placed a black hood on my head and left me hanging all night.”

Ejaili worked as a cameraman in Iraq for Al Jazeera Arabic channel in November 2003.

He was gathering information about an attack against American forces in Diyala. While at the scene, a US soldier asked him what he was doing and who he worked for.

When he answered truthfully, Ejaili was arrested. He would spend the next four months imprisoned in the notorious facility.

First he was held hooded and chained in Diyala, taken next in a helicopter to Tikrit, and then driven to Abu Ghraib prison – a place where he alleges he was sadistically and criminally abused.

“I was terrified,” Ejaili said, adding that he thought he would be killed.

The Americans sang to him as he hung immobilised: “Happy birthday Al Jazeera.”

When graphic photographs surfaced in April 2004 showing “the scandal in Abu Ghraib,” it was all too familiar to Ejaili.

“There were so many people in the prison with me,” he said.

Nearly 13 years later, Ejaili and three other Iraqi men who say they were tortured at Abu Ghraib are still waiting to see if anyone can legally be held accountable.

On Thursday, a federal court in Virginia will decide if the US-based contractor CACI Premier Technology can be sued for alleged abuses at the prison. Al Shimari v CACI is a long-running civil suit that began in 2008 and is being argued on the prisoners’ behalf by the Center for Constitutional Rights.

Following the 2003 US invasion of Iraq, the Americans took control of Abu Ghraib prison and used it to detain and interrogate suspects. CACI was contracted to provide interrogation services and received more than $19m in payments.

The contract, awarded to CACI in August 2003, was to provide “interrogator support”, “screening cell support”, “open source intelligence” and “special security office” among other things .

Defense Department investigations found that CACI interrogators “directed or participated in some of the abuses, along with a number of military personnel”. Requests for comment from the Pentagon went unanswered.

CACI has called the civil suit baseless and in its defence argued: “The plaintiffs have not identified any mistreatment they suffered at the hands of a CACI PT interrogator, nor have they developed evidence that CACI PT personnel directed anyone to mistreat any of these plaintiffs”.

He said that sometimes in Abu Ghraib he would be chained to his cell and made to endure a day or two without food. During his interrogations, which happened every few days, he was stripped, sworn at, and “sometimes there would be further punishment”.

There was the humiliation and degradation, too, like the time he became violently ill and vomited. Ejaili was forced to clean up the mess with his own prison uniform – and then ordered to put it back on.

With the help of a lawyer, Ejaili was finally brought before an Iraqi court a few months after being detained and released from Abu Ghraib.

“It was a matter of 10 minutes. The judge told me, ‘There are no charges against you.'”

And with that, Ejaili was dumped outside the prison with none of his personal belongings, not even his shoes.

Some of his co-plaintiffs make even more troubling allegations about their time in US custody.

Suhail Najim Abdullah al-Shimari, detained from 2003 to 2008, said he was given electrical shocks, threatened with dogs, and forced to partake in physical activities while naked.

Taha Yaseen Arraq Rashid, held from 2003 to 2005, alleged that he was placed in stress positions, shot in the head with a Taser gun, had his bones broken, was subjected to sexual acts while chained – and forced to watch a female prisoner being raped.

Saad Hamza Hantoosh Al-Zuba’e, released in 2004, had his genitals beaten with a stick and was kept in solitary confinement for almost a year.

Ejaili is now living in Doha, Qatar, and working as a producer for Al Jazeera Arabic.

He is busy raising his three children and has told them nothing of his time in Abu Ghraib. His wife, however, “she knows all the details”.

All four plaintiffs are only looking for their cases to move forward through the courts.

Thursday’s federal hearing will address the “political question doctrine”, which says the federal courts should not hear cases that are the responsibility of other government branches.

CACI is arguing that even if the company was at fault, it should be immune from a court’s review.

“To say that torture is a political question is to assert, contrary to Congress and international law, that torture remains a policy option,” wrote David Cole, a professor at Georgetown University Law Center.

There is photographic evidence that men in Abu Ghraib were made to act like dogs, assembled in naked pyramids, and stand in crucifixion poses.

“I am not shocked. Neither is anyone else who served at Abu Ghraib,” Eric Fair, who worked for CACI, wrote about the images in his memoir, Consequence.

“Instead, we are shocked by the performance of the men who stand behind microphones and say things like ‘bad apples’ and ‘Animal House’ on night shift.”

“I simply want justice. Torture needs to stop everywhere,” he told Al Jazeera. “All my life I learned that justice is above all in America. So why not give me the justice I deserve?” 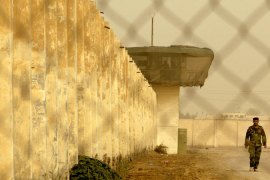 As a court rules that crimes committed by US corporations abroad cannot be tried in the US, what are the implications? 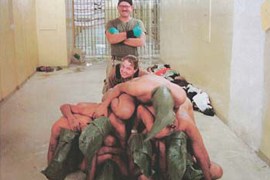