Former director of news of Al Jazeera’s Arabic channel Ibrahim Helal, who is among three journalists sentenced to death in absentia in Egypt, has slammed the verdict against him as politically motivated.

Helal, who was among six in total given the death sentence on Saturday for allegedly leaking state secrets to Qatar, told Al Jazeera that there were inconsistencies in the case and the charges were part of a wider government campaign against press freedoms.

In a statement released on Saturday, the Al Jazeera Network said it received the ruling “with shock, agitation and condemnation”.

“The ruling is unprecedented in the history of journalism in the world; it represents a stab in the back of the profession and freedom of expression worldwide.

“The global and Arab journalistic organisation and the international community should not stand silent in the face of the manipulation by [the Egyptian government] of a well-established state institution, namely the judiciary, to intimidate free journalism and threaten journalists’ lives rather than enforcing justice.”

“It does not make any sense that the Muslim Brotherhood and Qatar needed me to mediate between them.”

‘No right to appeal’

He also explained that he has no right to appeal the verdict, but expressed hope that he would be cleared of the charges in the future.

“As a person who was sentenced to death in absentia, I do not have any right to appeal or be represented legally … I do not believe that anything legal can help because the legal course has been hijacked politically for the last three years.

“But I have never been in any political organisation, I have never done any harm to my country, and I believe that will be cleared one day.”

Asmaa Mohamed al-Khatib, identified as a reporter with the pro-Brotherhood Rassd news outlet, was also sentenced to death in absentia.

The case of Morsi, who is also charged for espionage for Qatar, was however, adjourned.

Morsi has already been sentenced to life and 20 years in prison in three separate trials.

“I believe that this is a weak point in the Egyptian system, which might bring catastrophes to the whole country , especially when it comes to freedoms and human rights,” Al Jazeera’s Middle East Analyst Yahia Ghanem said on the judgment. 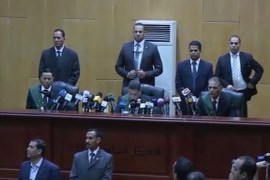 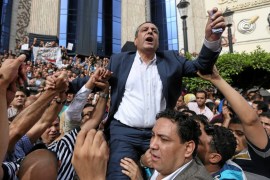