South Korea and Iran are expected to sign several trade deals worth billions of dollars and discuss sensitive subjects like North Korea following President Park Geun-hye’s arrival in Tehran with a large group of business leaders.

Park asked for Iran’s help in implementing UN Security Council resolutions calling for the nuclear disarmament of the Korean peninsula.

Iran and North Korea are allies. Tehran and Pyongyang have long been suspected of being close partners in developing weapons technology.

North Korea was handed tougher UN sanctions for its fourth nuclear test and a long-range rocket launch earlier this year.

“Our demand is a world free of weapons of mass destruction, especially freeing the Korean peninsula and the Middle East from destructive weapons,” Rouhani told IRNA.

“A number of cooperation deals, trade deals and energy deals have been signed,” he said.

“And we have been hearing a lot of numbers, upwards of $10bn in agreements. So this is a big day for Iran-South Korea relations. Security was also on the agenda, including the sensitive subject of North Korea.”

Iran has been seeking to integrate into the global financial system and improve ties with other countries since its own nuclear-related sanctions were lifted in January under a deal with world powers.

South Korea, the world’s fifth largest importer of crude oil, used to be one of the biggest buyers of Iranian oil, but imports plunged as a result of sanctions.

IRNA said trade between the two countries was currently at $6.1bn, and that Iran would like to boost that to $17.4bn, a level last reached in 2011, before the sanctions were imposed.

“Iran’s oil exports to South Korea have more than quadrupled to 400,000 barrels a day since international sanctions were lifted in January,” Bijan Zanganeh, Iran’s oil minister, was quoted as saying by the Shana news agency.

Iran, whose exports to South Korea were less than 100,000 barrels a day before sanctions were lifted, has since worked to quickly boost its output.

It has focused on selling to its traditional customers in Asia, but has also shipped supplies to Europe.

South Korea and Iran established diplomatic ties in 1962 but their heads of states have never had bilateral talks, according to Park’s office. 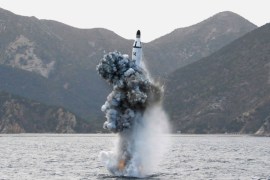