At least two unknown assailants have hacked a Hindu tailor to death in central Bangladesh, police say, amid a rise in attacks on religious minorities in the South Asian nation.

Police officials said they were investigating whether Saturday’s killing in Tangail was linked to religious groups suspected of a series of minority killings, or was tied to a family dispute. The victim Nikhil Joarder, in his 50s, was killed by the roadside.

“They came on a motorcycle and attacked him as he sat on a roadside. They hacked him on his head, neck and hand,” Aslam Khan, deputy chief of Tangail district police, told AFP news agency.

The Islamic State of Iraq and the Levant (ISIL, also known as ISIS) group has claimed it carried out the attack in a post online but this could not be independently verified.

Bangladesh is reeling from a series of attacks on members of minority faiths, secularists, foreigners and intellectuals in recent months, including two gay activists and a liberal professor in the past eight days alone.

Many of the killings have been blamed on, or claimed by, groups such as al-Qaeda or ISIL.

Police said local Muslims had filed a complaint against Joarder, who owned a tailoring shop, to police in 2012 for making comments about Prophet Muhammad.

He was charged with hurting religious sentiments and spent three weeks in jail.

“But the trial did not proceed after the complainants withdrew the charges,” Abdul Jalil, the police chief of Gopalpur sub-district, told AFP.

Another police official said that the dispute appeared to have ended peacefully, adding that the victim’s family said he was also being threatened by a relative.

The murder came less than a week after attackers hacked to death two gay-rights activists in the capital Dhaka, saying they tried to promote homosexuality in the deeply conservative nation.

In February suspected ISIL supporters decapitated a top Hindu priest inside a temple complex in a northern district.

However, the government denies that international groups such as ISIL or al-Qaeda have a presence in the country.

Hindus make up around 9 percent of Bangladesh’s population. 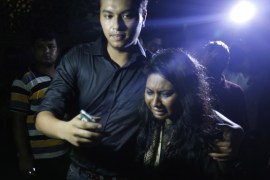 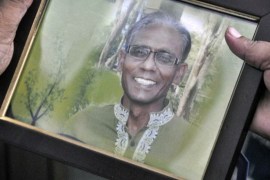 Student not charged but held for interrogation, police say, after Rezaul Siddique was hacked to death in Rajshahi.