Saturday’s outcome represents a significant realignment of competing factions in the Islamic republic, with conservative MPs losing their dominance and being outnumbered for the first time since 2004.

The result is also an implicit public vote of confidence for Rouhani, who won a landslide election victory in 2013 and went on to clinch a historic deal with world powers over Iran’s nuclear programme that lifted sanctions.

Tallies also showed 17 women were elected – eight more than at present and the highest female representation since the country’s revolution in 1979.

Almost a quarter of parliament’s seats were at stake in runoffs on Friday in what was a showdown between reformists and conservatives seeking to influence the country’s future.

Although Iran’s parliament has marginal powers – under the country’s political system, religious leaders can veto legislation – the result will make economic reforms easier and could also speed up social change demanded by reformists.

Their return as a major force is a shake-up for conservatives after an era of diplomatic clashes with the West over a nuclear programme that, before Rouhani, had left Iran under threat of military attack.

Most politicians who opposed the agreement struck last year after years of talks with the United States and other leading nations were rejected by voters.

Iran does not have rigid party affiliations, making election outcomes notoriously opaque. Some candidates were backed by both camps and others stood as independents.

But of the 68 seats being contested on Friday, 36 went to the pro-Rouhani List of Hope coalition and 17 to conservatives with only four constituencies yet to be declared, according to official results.

That would give reformists at least 131 seats in the new 290-member parliament, 15 short of a majority but more than their rivals’ 124 MPs. Remaining seats went to independents who could hold the balance of power.

The second round was needed because no candidate won the minimum 25 percent required in the first round.

In stark contrast to the first two-and-a-half years of his presidency the result should give Rouhani a supportive parliament.

The outgoing conservative-led chamber repeatedly blocked him and even impeached one of his ministers.

Their electoral gains in February came only six weeks after Tehran’s implementation of the nuclear deal.

INSIDE STORY – Is a new political era beginning in Iran?

About 17 million citizens were eligible to vote on Friday and polling took place in 21 provinces, but not the capital Tehran, as reformists won all of the capital’s 30 seats in the first round.

Ayatollah Ali Khamenei, Iran’s supreme leader with powers that far outweigh those of Rouhani, had urged a strong turnout, saying that the vote was no less important than the initial poll.

Mohammad Reza Aref, a partly US-educated engineer and leader of the reformist pro-Rouhani List of Hope, has set a target of at least another 40 legislators.

They could also buy time for Rouhani to try to turn around a struggling economy amid concern over the nuclear deal.

Iranian officials including Khamenei have complained that the US is not honouring its commitments and is in fact taking steps to dissuade non-American banks from doing business with Syria.

Although the conservatives went backwards two months ago they did not change tack this time round, keeping up pressure over what they say is a silent agenda among reformists to give up the principles of the revolution.

“We hope that people in this round can have a parliament in line with the goals of imam and the leadership by electing principlists,” said Gholam-Ali Haddad Adel, head of the conservative coalition.

He was referring to the late Ayatollah Ruhollah Khomeini and his successor, Khamenei.

Haddad Adel was a victim of the reformist surge in February, losing his own seat in Tehran. 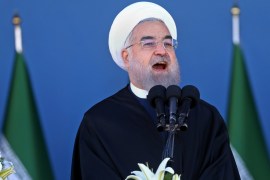 State media say reformists and moderates won 128 seats in 290-member assembly in second round of voting. 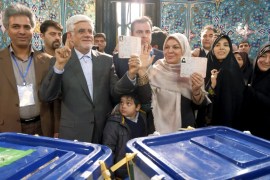 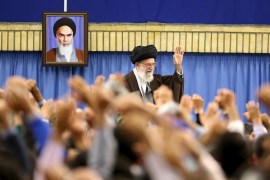 Allies of President Hassan Rouhani seek to make major seat gains in second round after strong showing in first vote.