The United Nation’s aid chief has issued a strongly worded appeal to world powers to revive a shattered ceasefire in Syria and put an end to the “massive human suffering” that has left millions of people facing desolation, death and starvation.

Stephen O’Brien told the UN Security Council on Thursday that it must not squander what he saw as an opportunity for peace in recently stalled talks in Geneva, and again called for unimpeded access to get aid to people trapped by renewed and fierce fighting in the country.

“We must all be ashamed this is happening on our watch,” Stephen O’Brien told the Security Council during a meeting on the humanitarian crisis caused by the five-year war.

“Deliberately deprived of food and medicine, many face the most appalling conditions of desolation, hunger and starvation.”

WATCH: Syria – Starvation as a weapon of war

He also criticised the Syrian government’s removal of medicine and medical supplies from aid convoys, calling the practice inhumane and warning President Bashar al-Assad’s government that those responsible for what he called unnecessary suffering and loss of life would be held accountable when the war ends.

Monitors and activists say about 200 people were killed in the city of Aleppo alone over the past 24 hours, including at least 14 who died when a hospital supported by Doctors Without Borders and the International Committee of the Red Cross was hit.

The Assad government has denied it was responsible.

People in the city, though, told Al Jazeera that government jets had carried out at least 40 more air strikes since the attack on the hospital and that the dead included at least six children.

Footage showed destroyed buildings, still blazing, as teams of rescue workers combed through rubble where dead bodies could be seen, pulling people out. One man held a dust-covered child in his arms.

A boy cried over the body of his younger brother in a morgue and said that his father had been killed in a previous strike a month ago.

“He’s bombing people in wheelchairs,” one man shouted. “Are they the terrorists?”

READ MORE: You probably won’t read this piece about Syria

White House spokesman Josh Earnest described the attacks as abhorrent and immoral, saying they were “entirely consistent” with the previous actions of the Assad government.

On Thursday, UN envoy Staffan de Mistura said that in the previous 48 hours, one Syrian was killed every 25 minutes, and one wounded every 13 minutes.

The upsurge in strikes, shelling and fighting came as the main opposition bloc at the Geneva peace talks, the High Negotiations Committee (HNC), walked out and threatened to boycott a planned further round of discussion unless the government stopped its campaign of air strikes.

The HNC left formal negotiations last week, saying that it needed a “pause” after at least 40,000 people fled fighting near Aleppo when government forces pressed on with an offensive against rebel fighters there.

De Mistura estimated last week that 400,000 Syrians had been killed during the war, though that was not an official figure. Millions more have been forced out of the country. 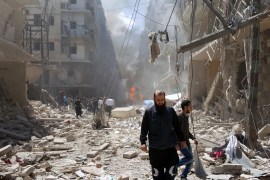 Dozens killed in wave of air strikes in Syria’s Aleppo

Syrian government carries out more than 40 strikes in Aleppo leaving at least 30 dead, according to sources in the city. 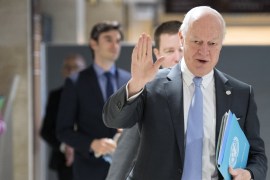 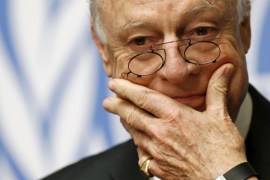