Citizens of Equatorial Guinea are heading to the polls in a vote expected to hand Teodoro Obiang Nguema Mbasogo, the incumbent president and Africa’s longest serving leader, another seven-year term in office.

Obiang, 73, faces six mostly unknown opponents, with most of the opposition boycotting the poll.

Election results will start to come in after the polls close at 9pm local time and final results are expected on Monday.

Obiang, who has ruled Equatorial Guinea for nearly 37 years after overthrowing his uncle in a coup, is accused of presiding over one of the world’s most corrupt and repressive governments.

Critics accuse Obiang of failing to distribute the country’s oil wealth to the population of about 700,000.

According to the poor living in the slums, the money seems to be going to only a few people.

They allege it is going to Obiang’s family, the inner circle of the government.

They say there is not enough distribution of wealth.

Some opposition parties are boycotting the election, but others are participating, although they say campaigning was difficult and have questioned the credibility of the electoral process.

Some key countries have chose to remain quiet about the vote.

According to the United Nations 2014 Human Development Report, the country has the highest per capita gross domestic product of Any African country – about $37,000.

But it ranks 144 out of 187 countries in the Human Development Index that measures social and economic development.

As a result, Equatorial Guinea has by far the world’s largest gap of all countries between its per capita wealth and its human development score.

Al Jazeera’s Haru Mutasa, reporting from the port city of Bata, said many people living in the country are still “poor, frustrated and unemployed”.

“Opposition leaders say much of the nations oil wealth goes to the president and his family,” she said.

“They also accuse some in the international community of ignoring alleged human-rights abuses because of oil interests.”

Equatorial Guinea is the third-largest oil producer in sub-Saharan Africa.

The ability of African leaders like Obiang to stay in power for a long time is rooted in “the lack of mature opposition” in their countries, says Marie-Roger Biloa, editor of the Paris-based Africa International magazine.

The opposition in Equatorial Guinea is practically “nonexistent”, she told Al Jazeera.

“Those who are [in opposition] are not resistant. So it is very easy for the incumbent president to stay, because he is not really challenged.”

“Equatorial Guinea was a nobody until oil was discovered there roughly 20 years ago,” she said.

“There is a very tiny population. One family is ruling over the country. Oil is a very good shield.”

Opposition parties say campaigning had been difficult in the run-up to Sunday’s vote.

“We are not free here. There is no freedom of speech,” Bonifacio Nguema, UCD party leader, told Al Jazeera.

“Some opposition members have been beaten up and arrested. We live in a police state.”

Amnesty International, the rights-monitoring group, says torture and arbitrary detention of government critics have been routine practices in Equatorial Guinea under Obiang’s rule.

The government denies the allegations of rights abuses and corruption made by the opposition and international rights groups.

Obiang’s supporters say he has strengthened Equatorial Guinea’s economy and brought peace and security to the country.

Gabriel Mbaga Obiang Lima, the energy minister, says political stability is essential for the country and Obiang is the person to provide it for the next seven years.

“We must continue to develop and transform the country,” he said.

“We need to modernise, grow democratically in a climate of humility so we have peace and economic stability.” 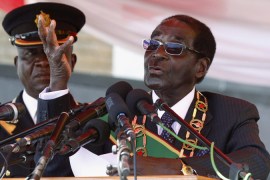 Why do some African leaders cling to power?

A referendum to change the constitution in Congo triggers violent protests.

Residents of the Africa Cup of Nations hosts are hoping to get more out of the tournament that just stadiums. 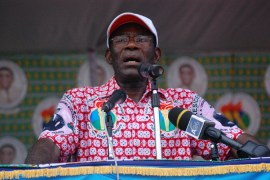 Vote to pave way for constitution that seeks to limit presidential terms in nation with Africa’s longest-serving leader.