A bomb explosion and subsequent fire has ripped through a bus in West Jerusalem, Israeli police said, with medics reporting that at least 16 people were wounded.

Police were initially uncertain whether Monday’s explosion was caused by a bomb, saying all causes of the blast were being investigated.

Later it confirmed that it was “some sort of explosive device” that caused the blast.

There was no immediate claim of responsibility for the apparent attack.

A police spokesman said two people on board the bus that exploded were seriously wounded, while the other wounded people had been in a nearby bus and car that were also damaged.

According to the police commissioner, it was too early to know the identity of the attacker or whether it was an attempted suicide bombing.

Police officials had earlier said all options were being examined, including a possible mechanical problem.

Most of the injuries were said to be burn wounds or from smoke inhalation.

An AFP news agency journalist at the scene said that one bus was completely burned out while another was partially burned, with a large contingent of firefighters battling to extinguish the blaze.

The incident came as Israelis prepared for the Passover holiday, with tensions already high after a wave of violence that began in October which has killed more than 200 Palestinians and 28 Israelis.

Most of the Palestinians killed were carrying out knife, gun or car-ramming attacks, according to Israeli authorities.

The violence has steadily declined in recent weeks. 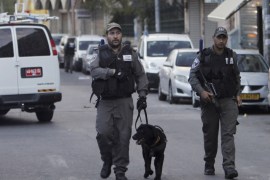 Two Palestinian suspects shot dead by police after injuring one person in latest string of violence.

Court charges soldier with manslaughter for fatal shooting of wounded Palestinian in Hebron, which was caught on video.