Scores of Taliban fighters were killed on Friday after launching an offensive against Afghan security forces to seize the strategic northern city of Kunduz.

Fighting broke out on Thursday in six districts in Kunduz province, a crucial northern stronghold close to the Tajikistan border, as well as around the provincial capital, which the Taliban captured and held for several days last year.

Earlier on Friday, Jangalbagh said security forces were keeping “the situation under control”.

“There is heavy fighting going on but the militants have failed to capture any areas and we are pushing them back,” Jangalbagh told the Reuters news agency.

The offensive around Kunduz began only days after the armed group announced its annual spring offensive, vowing to launch large-scale attacks using suicide bombers and guerrilla fighters to drive the Western-backed government from power.

The sound of gunfire and explosions could be heard as far as 5km from the eastern outskirts of Kunduz city, witnesses reported. Fearful residents hid in their homes and many shops remained closed.

The highway between Kunduz and neighbouring Takhar province was also blocked, officials said.

Imamuddin Qureshi, chief of Kunduz’s Imam Saheb district, said several security outposts had already fallen to the Taliban, and he called on the government in Kabul to send reinforcements and air support immediately.

Taliban spokesman Zabihullah Mujahid said fighters had captured outposts in six districts and three bomb blasts had killed seven members of the Afghan security forces just outside Kunduz. Those claims could not be verified immediately.

With those memories still fresh, officials took to the airwaves to try to head off panic among the public.

“We will assure our people that the situation is under control and we will never allow the catastrophe that happened last year,” Jangalbagh said.

The unrest has gained strength since the withdrawal of international troops from combat at the end of 2014, and the Taliban are stronger than at any point since they were driven from power by US-backed forces in 2001. 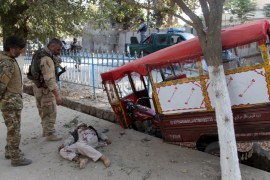 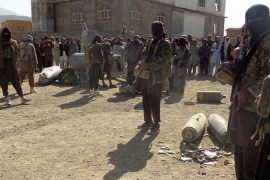