Brazilian President Dilma Rousseff has lost another coalition partner before an upcoming parliamentary vote on her possible removal.

The right-wing Progressive Party (PP) announced late on Tuesday that it was leaving the government.

Ciro Nogueira, the leader of PP, said the party’s 47 politicians would support Rousseff’s removal from office in a parliamentary vote planned for Sunday.

The lower house of parliament is scheduled to vote on whether to start the process of having Rousseff removed from office, for which a two-thirds majority vote is required.

If the vote passes this hurdle, the motion passes on to the upper house, or Senate, for approval.

The Brazilian Republican Party, which also left Rousseff’s coalition, has said its 22 members of parliament would also vote against the president, who is a member of the leftist Worker’s Party.

On Tuesday, Rousseff branded her vice president a traitor and said he was a conspirator in a “coup” using impeachment proceedings to bring down a popularly elected government.

“If there were any doubts about my denunciation that a coup is under way, there can’t be now. The coup plotters have a leader and a deputy leader,” she said in a blistering attack in the capital Brasilia on Tuesday.

Referring to the leak on Monday of a recording in which her vice president, Michel Temer, practises the speech he would make if Rousseff were impeached, the president said: “The mask of the conspirators has fallen.”

“We are living in strange and worrying times, times of a coup and pretending and treachery,” she said. “Yesterday they used the pretence of a leak to give the order for the conspiracy.”

Rousseff is accused of hiding the extent of the budget deficit during her re-election campaign at the end of 2014.

The political pressure is being exerted against the background of a corruption scandal at the semi-public Brazilian fuel multinational Petrobras, at which Rousseff worked as chair of the supervisory board between 2003 and 2010. 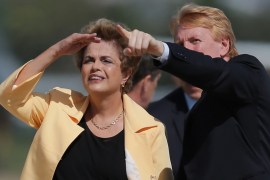 Dilma Rousseff is in a desperate battle to save her presidency before an impeachment vote in Congress this weekend.

Survival of Brazilian president hangs in a balance as Congressional committee votes on her impeachment on Monday.