Turkey’s outlawed Kurdistan Workers Party (PKK) claimed responsibility on Friday for a car-bomb attack that killed seven special forces policemen and wounded 27 people in the southeast, a statement on its website said.

The PKK has fought against the Turkish state since 1984, initially for Kurdish independence, although it now presses for greater autonomy and rights for the country’s largest ethnic minority. The conflict has left tens of thousands dead over the years.

Thursday’s attack in Diyarbakir, which took place a day before Prime Minister Ahmet Davutoglu’s visit to the Kurdish-dominated city, was one of the larger car bombings in months of violence in the region.

On Friday, Davutoglu began his visit under heavy security as he attended a funeral ceremony for the policemen killed.

“They thought that we would be scared, but we are not scared. We will not waver and we will go right to the end,” said Davutoglu, who also took part in Friday prayers outside the Great Mosque in Diyarbakir’s central Sur district.

Parts of Sur have been under curfew since the military launched a major operation against the PKK in the area on December 2, with the clashes causing widespread destruction to the historic district.

Thursday’s explosion, which targeted a police vehicle near a busy bus terminal, damaged several cars and shattered almost all the windows of a multi-storey building.

“It was like an apocalypse, really hard to explain,” Ugur Bahcivanci, a local engineer, told Al Jazeera.

“My parents were cooking in the kitchen. I was in the bathroom, my children were studying in the living room. All of a sudden with the powerful explosion we felt the storm … and saw something very strong coming on to us.”

Al Jazeera’s Omar al-Saleh, reporting from Diyarbakir, said the explosion was caused by a parked car packed with explosives.

“It was detonated by a remote control once the minibus carrying the police arrived,” he said.

Of those wounded, 14 were civilians and 13 police officers. 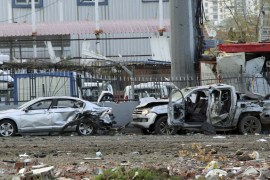 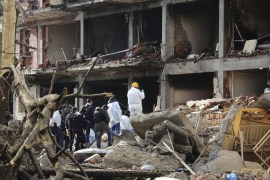