A bomb planted on a bus carrying government officials exploded in northern Pakistan on Wednesday, killing at least 15 people.

The bus was bringing dozens of government employees to work from Mardan when the bomb went off near Sunehri Masjid in Peshawar, a busy area of the northwestern city.

“The blast was really loud … the windows of the buildings nearby were shattered,” witness Usama Hussein told Al Jazeera over the phone.

“The roof of the bus was completely blown off by the bomb. I saw many dead bodies and severely injured people being rushed to the hospital.”

The attack was the latest in Peshawar, which has been plagued by bombings and gun assaults by the Pakistan Taliban.

“These cowardly attacks cannot shatter our unflinching resolve against terrorism,” Nawaz Sharif, the prime minister, said in a statement condemning the attack.

A group linked to the Pakistani Taliban said it carried out the attack in revenge for death sentences given to 13 of its fighters on Tuesday.

A suicide bomber killed 13 people on March 8 after blowing himself up outside a court in Charsadda, in Khyber-Pakhtunkhwa province, about 30km from Peshawar.

Pakistan has fought home-grown fighters since 2004 when the Taliban, displaced by the 2001 US-led invasion of Afghanistan, began a campaign in border tribal areas. 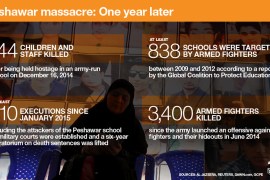 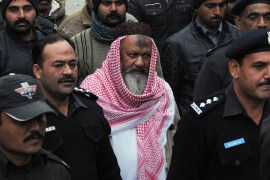 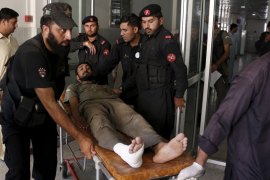