Eastern Ghouta, Syria – Among the hundreds of people who poured into the streets of the Syrian village of Saqba on Friday afternoon was Abu Amer, a civil defence worker who says he is determined to see the Assad regime fall.

“I’m out today in my official civil defence uniform, and I am fighting with everyone here for our freedom and to call for the toppling of the regime,” Abu Amer told Al Jazeera, noting that, like many of those marching on Friday, he felt a sense of responsibility to support the cause until the end.

I do not want my kids to learn that it's acceptable to remain silent. They should fight for their freedoms.

“Through the nature of my work, I have seen a lot of the difficulties people in Ghouta have faced first-hand. I have witnessed the destruction of these villages by the regime’s air strikes. I have pulled children out from under the rubble with my own hands,” Abu Amer said.

“That’s why I’m here now: I have made a promise to avenge every innocent child I’ve pulled out from under the rubble.”

Two weeks into Syria’s ceasefire, protests against the regime of President Bashar al-Assad have resumed in a number of towns and cities throughout the country, including Saqba, located in the besieged Eastern Ghouta on the outskirts of Damascus.

The Eastern Ghouta has been under siege since 2013, leaving tens of thousands of people trapped inside an active war zone.

Demonstrators called their protest the “Renewal of the Pledge” – a reference to their determination to topple Assad, which was at the heart of the 2011 uprising that spiralled into a five-year civil war. The war has killed more than 250,000 Syrians and displaced millions more.

Protesters also cited a lack of faith in the ceasefire, which they said was being violated daily in the Eastern Ghouta region. With sparse food and medical supplies coming into the area, many called for a complete lifting of the siege and an opening of the roads leading to Damascus, which have been closed off by checkpoints since the start of the siege.

Abu Ahmed, a Saqba resident who participated in Friday’s protest, says he has suffered a great deal both from the siege and from his individual persecution by the regime. He told Al Jazeera that he had been detained twice, and only released from the Adra prison after his family paid out six million Syrian pounds ($27,000). 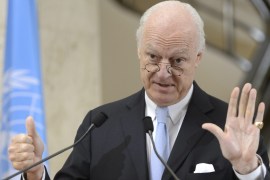 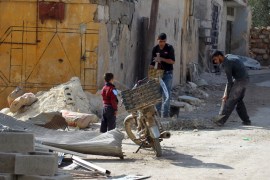 Thousands may have starved to death in Syria: UN

As UN prepares to roll out aid in besieged areas, official says “thousands” cut off may have already starved to death. 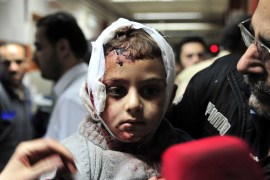 On day two of the truce, aid groups are rushing to get relief to 480,000 trapped Syrians during a lull in fighting.