A suicide bomber has killed at least 60 people and wounded dozens more by driving his explosives-laden fuel lorry into a security checkpoint south of Baghdad.

The suicide bomber attacked the checkpoint on Sunday on a strategic highway near Hilla, 90km from the Iraqi capital, reports said.

Another 70 people were wounded in the blast, police officials said.

The Islamic State of Iraq and the Levant (ISIL) group claimed responsibility for the attack in a statement posted on the website of the sympathetic Amaq news agency.

“A martyr’s operation with a truck bomb hit the Babylon Ruins checkpoint at the entrance of the city of Hilla, killing and wounding dozens,” the statement said.

Al Jazeera’s Jane Arraf, reporting from Baghdad, said: “It was apparently a suicide bombing, at a checkpoint that is usually manned by Iraq soldiers and federal police forces. A long line of cars along that key road were also caught in the blast.”

Hilla is the capital of Babylon province, a predominantly Shia region with some Sunni presence.

“It’s the largest bombing in the province to date,” Falah al-Radhi, the head of the provincial security committee, told Reuters news agency.

“The checkpoint, the nearby police station were destroyed as well as some houses and dozens of cars.”

Among the dead were 39 civilians, while the rest were members of the security forces.

A separate attack on Sunday killed several members of the Popular Mobilisation Forces in Khalidiya, near Ramadi, the capital of Anbar province.

Iraqi soldiers, with the help of US-led coalition fighter jets, are trying to advance towards areas controlled by ISIL fighters around Ramadi.

ISIL has carried out a number of deadly assaults against Iraqi security forces in recent days.

In the past week, a double bombing at a market in Baghdad’s Sadr City neighbourhood killed more than 70 people.

The following day a suicide attack at a funeral north of Baghdad killed about 30. 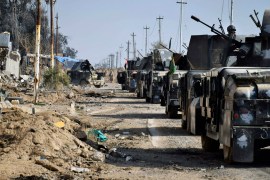 Iraqi PM under growing pressure to stop the influence of armed groups. 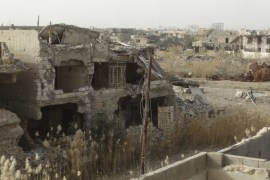