Rescuers in Syria have pulled three survivors from the rubble of a hospital 30 hours after it was hit by a suspected air strike.

The charity Doctors Without Borders (MSF), which ran the hospital in Maraat al-Nouman, told Al Jazeera on Wednesday that rescue operations were continuing for two members of its staff who were still missing.

Dramatic video of the recovery operation, which local activists posted on YouTube, showed a woman covered in dust and blood – but still concious – being dragged to safety.

Five MSF staff members were among up to 50 killed in a series of raids carried out on hospitals and schools in the Aleppo and Idlib provinces on Monday.

Russia, which is conducting an aerial campaign against rebel groups in the area, has denied it was responsible for the strikes after accusations were levelled against it by Turkey and activists.

The country’s health minister Veronika Skvortsova said its military targeted only the Islamic State of Iraq and the Levant (ISIL) group and did not deliberately hit civilians.

While denying responsibility, Syria’s ambassador to the UN, Bashar al-Jaafari, described MSF as a front organisation for the French intelligence service.

Over the past year, MSF facilities in Syria, Yemen, and Afghanistan have been hit by air strikes. 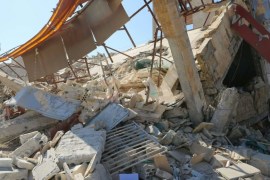 Strikes on hospitals and schools kill up to 50 in Syria 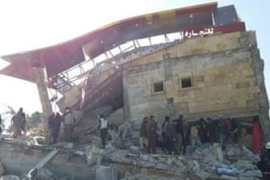 Strikes on schools and hospitals in Syria ‘war crimes’

France and Turkey denounce raids in which up to 50 people were killed as Assad casts doubt on prospects for a truce.