Back in the summer of 2015, at the height of the ongoing refugee crisis, Karolin Schwarz started noticing a disturbing pattern.

Just as refugee arrivals in her town of Leipzig, eastern Germany, began to rise, so did the frequency of rumours over supposed crimes committed by those men, women and children who had fled war and hardship to reach Europe.

As months passed by, the allegations became even more common, increasingly popping up in social media feeds and often reproduced by mainstream news outlets.

“Since January, these rumours seemed to spread even more,” Schwarz, 30, told Al Jazeera.

“The stories seemed to be [orchestrated] by far-right parties and organisations and I wanted to try to find some way to help organise this – maybe find patterns and give people a tool to look up these stories [when] they were being confronted with new ones.”

And so she did.

Using an interactive system of popping dots, the map documents and categorises where those “crimes” allegedly took place. It then counters that false information with official statements from the police and local authorities, as well as news reports in which the allegations have been disproved.

The debunked cases marked on the map range from thefts and assaults to manslaughter – but one of the most common topics is rape, Schwarz said.

“There is a prominent case from Berlin about a 13-year-old girl being held hostage and raped by refugees. This one even led to Russia intervening, because the girl is from a late re-settler family coming from Russia,” said Schwarz, a business consultant.

Other “absurd” rumours, Schwarz said, include refugees stealing and slaughtering swans from a lake near their shelter, or a story about a female refugee from an African country who got hair extensions and braids because of religious reasons, and then supposedly charged her local government some 720 euros ($800).

One week in, Hoaxmap has featured some 240 incidents, mainly from Germany but also Austria and Switzerland.

“As the number of hoaxes increases, we want to work with the data as well, to check if there are relations between stories which are often shared locally,” Schwarz said.

More than 1.1 million people escaping poverty, war and repression in the Middle East, Asia and Africa reached Europe’s shores last year– most of them heading for Germany – while thousands of others died undertaking the perilous journey.

While large numbers of people across Europe have been welcoming and volunteered to help those arriving, there has also been a sharp increase in anti-refugee sentiment and hate crimes – including arson attacks, physical violence, psychological abuse and growing fear-mongering.

In December 2015, the Ethical Journalism Network, a UK-based media watchdog, criticised global media organisations for allowing coverage of the refugee crises and immigration debates to be hijacked by right-wing populists, who exploit public fears of immigration to serve their own political interests.

The report also said that media that framed questions around immigrants who break the law have exacerbated anti-immigrant sentiments.

Last month, conservative German magazine Focus was criticised after running a cover story on the New Year’s Eve assaults on women in Cologne, in which at least 18 asylum seekers were identified as suspects, showing a white naked woman whose skin had been stamped with handprints of black paint.

Liberal publication Suddeutsche Zeitung also apologised at the time for printing a picture of a black arm reaching up between a pair of white female legs to portray the Cologne sex attacks.

In the UK, many of the country’s leading newspapers last summer used terms such as “undeserving leeches”, a “security menace” and an “existential threat to national values” to describe refugees trying to get into Britain through the Channel Tunnel.

INTERACTIVE: The Syrian refugee giving back to Germany

In Hungary, the government instructed media in the country not to show pictures of women and children for fear of encouraging too much sympathy for Syrian families escaping the country’s war.

“When describing those who try to cross to Europe, many use images of burly men forcing their way into trucks, not those left in limbo with no means of support often with young children – or indeed children on their own – their money having been taken by traffickers,” Sue Clayton, a professor of film and television at Goldsmiths, University of London, told Al Jazeera.

“Images of clashes with the police, overcrowded borders [and] flare-ups with police make better news than the reality for most refugees the world over – they are stuck in limbo in camps or ghettos, with no future and no hope of being productive and useful citizens.”

It is this kind of coverage – articles that reinforce negative stereotypes and anti-refugee sentiment – that the team behind Hoaxmap said they want to expose.

“We’ve received a lot of mails from people thanking us because they heard some of these stories and could easily look them up on the map,” Schwarz said.

“We want to create a discussion on this phenomenon,” Schwarz said. “Rumours are being spread for political reasons and people try to create an atmosphere of fear and distrust.” 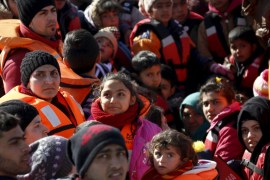 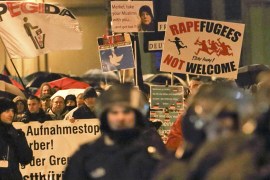