The brief arrest of an opposition leader in the Democratic Republic of Congo (DRC) has raised tensions ahead of a planned general strike called by opponents of President Joseph Kabila.

Martin Fayulu was arrested on Sunday around 230pm local time by security agents at the headquarters of his small ECIDE party in the capital Kinshasa, according to a senior military official.

The news quickly circulated on social media and supporters called for his immediate release – Fayulu was eventually released around 9pm local time on Sunday.

His lawyer, Jean-Marie Kabengela Ilunga, said Fayulu was not “arrested” but “kidnapped” by agents of the Military Detection of Anti-National Activities service.

Ilunga told Al Jazeera that his client had been “beaten” and was now considering taking legal action.

Following his release, Fayulu, who is a member of parliament, told the AFP news agency that the intelligence unit still had his car, a mobile telephone whose total contents they copied, some documents, a cheque book and almost $700 in cash.

They also kept more than 1,000 leaflets calling for a general strike on Tuesday against Kabila.

According to sources in Kinshasa, Fayulu was arrested for “inciting violence against public order”. His case will be heard in parliament.

“This country is on the road of dictatorship”, Muhindo, a young Congolese activist who gave a pseudonym for security reasons, told Al Jazeera.

“The general strike must succeed to show those in power that the people is against the sliding (delay of the elections) or a third mandate.”

Kabila became president in 2001, following the assassination of his father Laurent-Desire Kabila. He then went on to win disputed elections in 2006 and 2011.

Under the constitution, Kabila cannot run a third term in November, but and the opposition accuses him of plotting to stay in power by delaying the electoral process – Kabila has not yet commented on his future plans.

READ MORE: Blood and minerals – Who profits from conflict in DRC?

Fayulu’s ECIDE is part of an opposition coalition whose members signed a call for a nationwide general strike on Tuesday to press Kabila to step down when his mandate expires at the end of the year.

Etienne Tshisekedi, head of the UDPS opposition party, said in a press release on Monday that he was “supporting all peaceful demonstrations scheduled to pressure the current governement, and more especially” Tuesday’s general strike.

Yet, UDPS is divided and it is difficult to estimate how large any opposition protest might be in Kinshasa.

Still, some foreign schools have decided to close their doors on Tuesday.

A diplomat, who did not want to be identified for security reasons, told Al Jazeera that he is “almost sure” things will turn violent, “not necessarily in Gombe”, which is the administrative and commercial heart of the city, “but in La Cite”, one of the most popular parts of the capital.

There are also concerns over potential unrest on Thursday, which marks 10 years since the signing of the country’s constitution.

So far, no demonstrations have been announced but some opposition members have implied some peaceful protests may be organised.

With additional reporting by Habibou Bangre in Kinshasa. 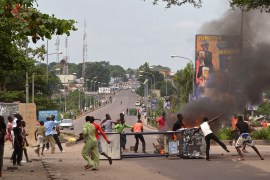 DRC’s opposition pushes for elections in 2016

A new opposition coalition is calling on President Kabila to hold elections that are due this year. 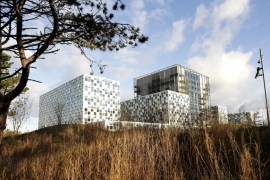 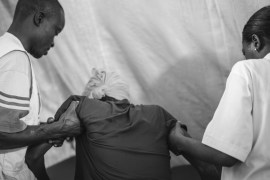