Trump’s remaining opponents – Jeb Bush, Ben Carson, Ted Cruz, Jim Gilmore, John Kasich and Marco Rubio – are likely yo benefit from their departures in a race that leaves seven Republicans in a field that once had 17 candidates.

Christie finished a disappointing sixth in New Hampshire, despite devoting nearly all of his campaign resources in the state, which is considered more friendly to moderate Republicans than Iowa, where the first in a series of state-by-state nominating contests is held.

“While running for president, I tried to reinforce what I have always believed – that speaking your mind matters, that experience matters, that competence matters and that it will always matter in leading our nation,” Christie said in a Facebook post.

“That message was heard by and stood for by a lot of people, but just not enough, and that’s OK.”

Christie, 53, scored perhaps his most triumphant moment on the campaign trail last weekend, when he attacked Republican rival Marco Rubio during a debate for robotically repeating his talking points.

The former federal prosecutor is a moderate Republican running a largely Democratic state who was once seen as one of the party’s best hopes in 2016.

Fiorina, the lone female candidate vying for the Republican nomination for US president, dropped out earlier on Wednesday after coming seventh in the crowded contest.

“While I suspend my candidacy today, I will continue to travel this country and fight for those Americans who refuse to settle for the way things are and a status quo that no longer works for them,” the former CEO of the computer company Hewlett-Packard said in a Facebook post.

“To young girls and women across the country, I say: do not let others define you. Do not listen to anyone who says you have to vote a certain way or for a certain candidate because you’re a woman,” she said.

Fiorina’s candidacy briefly caught media attention after a strong debate performance last September, but it quickly fizzled out under intense attack by her opponents, including the leading candidate Donald Trump, who won the New Hampshire primary.

One of her most memorable moments was when she called Trump an “entertainer”, and confronted the New York real estate businessman.

In 2010, Fiorina also sought public office when she ran for a US Senate seat in California. But she lost the race to the incumbent Democratic Senator Barbara Boxer. 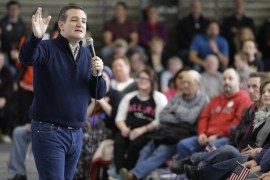 Clinton and Sanders in virtual dead heat in Democratic race in first voting event of the 2016 presidential campaign. 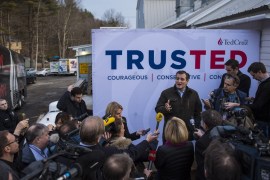 New Hampshire: The little state with the big voice

Presidential wannabes are working New Hampshire for votes, but should this older, whiter state have so much clout?