This is the season for nostalgia for a time when we once stood together, different people with one cause, armed with nothing but our sheer numbers. If I close my eyes I can still see people clapping to the tune of ‘The people want an end to the regime’.

Of course this does not mean that the sole problem lies outside Yemen. Yet the international community needs to stop pretending it does not have anything to do with how we got here, or how its policies helped exacerbate the situation.

In November 2011, the European Union delegation and the G10 diplomatic group, composed of the five permanent UN Security members and the Gulf Cooperation Council countries, sponsored a power-transfer deal.
The GCC initiative was signed by President Ali Abdullah Saleh at a ceremony in Riyadh. It involved the transfer of his powers to his  vice-president Abd Rabu Mansour Hadi in return for immunity from prosecution.
In the name of pragmatism, our dream was sold. In the name of security, justice was forgotten. The people in the streets were excluded from the negotiations and hence this agreement fell short of the comprehensive changes they were demanding and mass protests continued.

ANALYSIS: What went wrong in Yemen?

President Hadi came to power in a one-man “election” that cost $5m in a country where at the time more than 10 million people were going hungry – since March 2014 that number has risen to 13 million.

Although this “election” was legal, it was hardly legitimate. Some groups including the Houthis and the Southern Movement boycotted the vote. A national unity government was then created, evenly divided between the formal opposition alliance – many of whom were part of Saleh’s inner circle – and the ruling party.

The G10 countries informally assigned themselves the role of “facilitators of the GCC Initiative“. For example, the French were to lead work on constitutional reform, and the Americans on security and military restructuring.

Some Yemenis expressed concern that “external actors taking on these roles might bring their own particular preconceptions to bear”.

On paper, the UN-supervised National Dialogue Conference (NDC) was a good step, yet, the government appeared to be more concerned about winning the favours of the international actors than serving its own citizens. A week before the heavily financed NDC convened, I asked a woman in a village near the city of Hodeida: “What do you think of the National Dialogue?” I was met by a  blank stare.

I proceeded to tell her about the NDC, and then asked her which priorities she hoped would be discussed. “Our stomach,” she replied. “We are hungry and we need jobs.” The perspectives of these ordinary Yemenis were not included in the process, and hence a new social contract for Yemen could not take place.

In addition, before the start of the NDC, the technical committee recommended the implementation of “20 points” that were meant to rebuild trust between groups that were previously in conflict with the government. Yet even after the end of the NDC, only a few of these points had been implemented.

Since no trust mechanisms were applied, mistrust and old rivalries resurfaced. Confrontations in the north turned violent.

Owing to the insistence that the Yemen model was a success, NDC sponsors turned a blind eye to what was happening outside the conference halls.

After months of deliberations, Hadi extended his own tenure without an election and suddenly announced a federal system with six regions, with no consensus among NDC members or any decision in support of the move.

In July 2014, the government complied with the demands of the International Monetary Fund and lifted all fuel subsidies, increasing prices by between 60 and 90 percent overnight without notice and with no measures to ease the shock. Spontaneous protests erupted. Different groups, including the Houthis, capitalised on these grievances and recruited more members.

Houthi fighters extended their territorial control, and in September 2014 took over Sanaa after days of clashes. A new UN-sponsored agreement was not honoured, leading to a series of escalations that culminated in Hadi’s exile to Riyadh, the same city that once played host to Saleh.

Today, war is being waged on Yemen by the same countries that protected Saleh and gave him his last lifeline. The regional struggle between Saudi Arabia and Iran has also played out in the tussle for influence in Yemen. Given the complexity of countries and agendas involved, more conflict is likely to happen.

So, while parts of the country are ravaged by a civil war, the greater war is clearly not just between two Yemeni sides as the mainstream narrative suggests.

Today, Yemeni civilians bear the brunt of a vicious war, with 8,000 civilians killed, thousands displaced, and millions suffering from blockades. This in a country where wheat import dependency is about 95 percent. It is essentially a death sentence on an entire population.

Before the war, antidepressant pills were sold in great numbers. With no hope, no change in their employment status, no accountability, corruption on the rise, and a humanitarian disaster, many even took their own lives.

In 2012, the Ministry of Interior published a report citing a dramatic increase in suicide rates, especially among 18 to 35-year-olds. This has only increased with time. The war, of course, exacerbated this situation and led to Yemen becoming the world’s worst humanitarian crisis.

Nevertheless, despite this awful reality, my father, a man in his 80s who has experienced wars and imprisonment, still has hope.

The writer is a Yemeni researcher 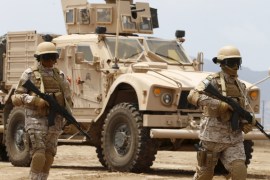 Truce was marked by repeated violations including multiple missile attacks across Saudi Arabia’s border with Yemen.