The United Nations’ refugee agency has called on Turkey to open the border to tens of thousands of Syrian refugees fleeing a government offensive in Aleppo province, who are stranded near the Bab al-Salameh crossing.

In an interview with Al Jazeera on Tuesday, UNHCR spokesman William Spindler praised Ankara for allowing in a number of wounded refugees and for providing humanitarian assistance to those on the Syrian side of the crossing.

But he said the Turkish government needs to “extend the opening of the border to others in need of protection and fleeing danger”, in accordance with its obligations under international law.

Turkey, which is delivering food, water and equipment to build tents to refugees across the border, has said that it will let them in only “if necessary” – under emergency situations.

Spindler said that his agency acknowledges the fact that Turkey is already hosting 2.5 million refugees, which has inflicted a “huge strain” on the country’s economy, and called on the international community to assist Ankara in handling the burgeoning crisis.

“This is clearly an international crisis and we all have an obligation to assist,” he said.

“The international community has to help countries such as Turkey, Jordan and Lebanon that are hosting the vast majority of Syrian refugees.

“It is unfair that only a few countries have received a brunt of the refugees and taking the enormous responsibility of taking care of them.”

He also noted the need for a resettlement programme that would see more refugees moved to Europe, North America, Australia, Latin America and other parts of the Middle East.

Syrian government forces, backed by Russian air strikes, have launched a major offensive over the past week in the countryside around Aleppo, which has been divided between government and rebel control for years.

Al Jazeera’s Zeina Khodr, reporting from the bordering Turkish city of Gaziantep, described a “worsening humanitarian tragedy on the ground” in Aleppo, as refugee camps overflow and the Syrian government onslaught of the city intensifies.

“There are thousands of others who are stuck in the town of Azaz, which is just a few kilometres from the Bab al-Salameh crossing,” she said.

“Already hundreds of families are moving from Azaz, because according to Doctors Without Borders there is no more space, the camps can no longer absorb more people and people are sleeping out in the open.

“These people are getting on buses and heading to the western side of Aleppo after receiving safe passage from the YPG (Kurdish People’s Protection Units).

“At the same time the UN is also warning that hundreds of thousands could be cut off from food if the Syrian government and its allies manage to encircle the rebel-held east of Aleppo city … The government is not far from it.”

In a separate development in the country, Doctors Without Borders said on Tuesday that air strikes last week hit a hospital that it supports in the southern governorate of Deraa, killing three people and wounding at least six, including a nurse.

“The strike on Tafas field hospital, some 12 km from the Jordanian border, took place on the night of February 5. It caused partial damage to the hospital building, and put its heavily-used ambulance service out of action,” the group said in a statement.

The humanitarian-aid NGO said that it was the latest medical facility to be hit by air strikes that have been “escalating over the past two months”, adding that more than 20,000 people have fled the town of Tafas in fear over the air attacks. 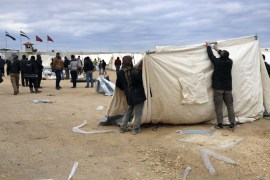 Turkey and Germany agree on plan to ease refugee crisis

Steps unveiled during Merkel’s visit include push to halt assault on Syrian city of Aleppo and curb “illegal migration”. 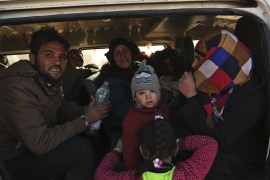